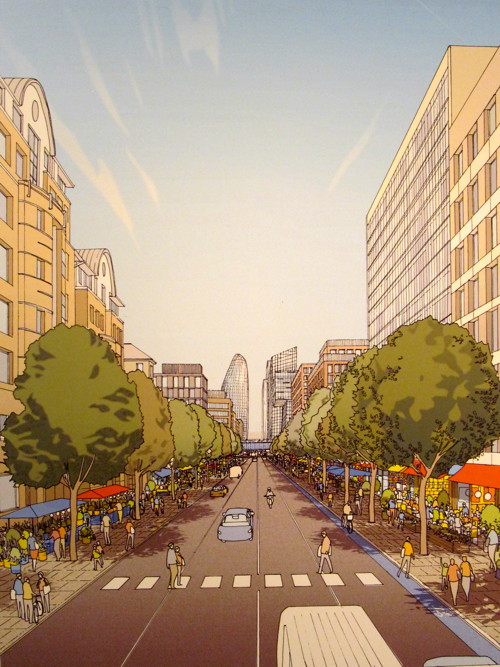 The document was launched on Friday morning by Southwark Council leader Peter John at the New London Architecture gallery in Store Street.

Cllr John traced the history of Blackfriars Road, which he pointed out is one of the longest straight roads in central London – even longer than The Mall.

"The bridge was constructed by the powerful Bridge House Estates committee of the City of London who drained the marshes and laid out the road which was christened Great Surrey Street," he said.

"The road was laid out at great expense with a strong vision to create a landmark corridor into central London.

"Really, it's our mission to revive that vision of our pioneering forefathers two and a half centuries ago."

Cllr John said that the draft SPD was intended to "give further confidence to potential investors and comfort to local residents and businesses that we are seeking to protect and enhance the character and identity of this historic borough".

The question of the height of new development along the road will inevitably attract a lot of attention.

"We will require development to be of an appropriate height, encouraging tall buildings at the key gateways and nodes," said Cllr John.

"We will encourage heights of 30 metres along most of the main road – 10 storeys of residential use.

"We want the tallest buildings at the north end of Blackfriars Road to reinforce the gateway location to the City.

"We also want some focal points at the key nodes along the street at Southwark Tube Station and St George's Circus and they will both be up to 70 metres.

"Well-designed buildings at these junctions must meet all the tests of our tall buildings criteria. It really is important that all tall buildings in Southwark are of exceptional design and quality."

Alongside the planning policy document, Southwark Council and local landowners commissioned Allies and Morrison Urban Practitioners to draw up a public realm scheme for Blackfriars Road. A list of 10 design principles for the street was recently published by the council.

Speaking at Friday's event, Peter Bishop of Allies and Morrison cited Park Avenue and West Broadway in New York and Barcelona's Avinguda Diagonal as international precedents for the development of Blackfriars Road.

Allies and Morrison's vision includes the concept of the 'Blackfriars Mile' with fun runs and events to highlight the one mile distance between Blackfriars Bridge and Elephant & Castle.

The draft supplementary planning document encompasses a much wider area than just Blackfriars Road itself, from Oxo Tower Wharf in the west to Sampson House in the east and King Edward Walk in the south west to the Borough Road junction with Southwark Bridge Road in the south east.

• Consultation on the draft SPD continues until Thursday 12 September. Council officers will be available to answer questions at Borough, Bankside & Walworth Community Council on Wednesday 26 June and Bankside Residents' Forum on Monday 2 September.

• An exhibition of future developments along Blackfriars Road can be seen at New London Architecture in Store Street until Saturday 29 June. The display panels are likely to be shown at Southwark Council's Tooley Street HQ during the first week of July.

How do you think Blackfriars Road should be developed?