"This is a fantastic gift to the borough," said Southwark Council leader Peter John at the reopening of Farnham Place. 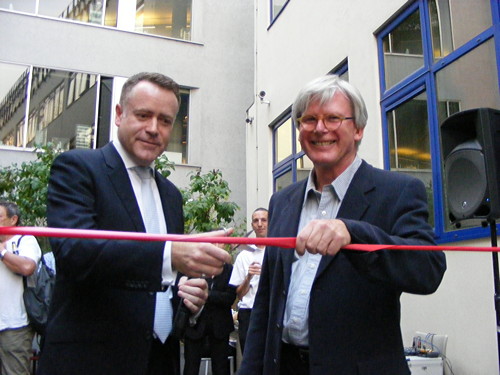 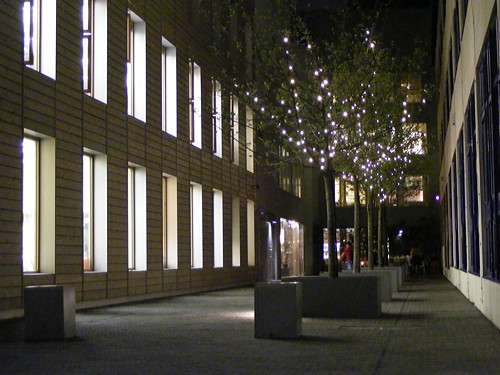 The cul-de-sac, running east of Great Suffolk Street and parallel with Southwark Streeet and Lavington Street, has been stopped-up as a public highway and relandscaped as a through pedestrian route planted with mature apple trees.

The design is by architecture and urban planning practice Allies and Morrison who occupy the north side of the street and initiated the project.

"We are here to celebrate this contribution to Southwark's public realm," said Graham Morrison who founded the practice in 1984 with Bob Allies.

"We were reflecting that it's almost ten years to the day that we moved into this building here," said Graham Morrison. "When we first found the site it was derelict and had been flattened by a rocket which landed in Southwark Street in 1944. It had been used as a filling station.

"It's amazing to see how this building, this street, this place, part of Bankside and Southwark have been completely transformed in the last decade."

He reminded the guests that Farnham Place was part of pre-Victorian Southwark and it was the Victorians who changed the street pattern with the creation of Southwark Street linking London Bridge with Blackfriars.

Because the Lavington Street building on the south side of Farnham Place was "too long an urban block" it had been decided to introduce the passage from Southwark Street below the Allies & Morrison building when it was built.

Southwark Council Leader Peter John spoke of the "wonderful" passage which Graham Morrison sees as being part of a new pedestrian route from the River Thames via Tate Modern to Union Street in the 'urban forest'.

Graham Morrison has recently persuaded the owners of the adjacent Mercure London Bridge Hotel to incorporate a pedestrian link between Farnham Place and Lavington Street into plans for an extension to the hotel.

"The history of Allies and Morrison in Southwark reflects the growth of Southwark," said Peter John who praised the practice as a local employer creating many jobs.

Speaking of the refurbished street he added: "The public realm is of exceptional quality."

The western archway entrance to Farnham Place is flanked by 200 year old Liberty of the Clink bollards.

• Allies and Morrison is taking part in Open House London later this month when there will be an opportunity to see the newly completed extension to the practice's main building. The ground floor of the refurbished grade II listed building is occupied by the Contemporary Applied Arts Gallery.