Pupils from St Jude's Primary School in Colnbrook Street joined Anneka Rice at Waterloo Station on Friday to record extracts from Alice's Adventures in Wonderland for a new talking book. 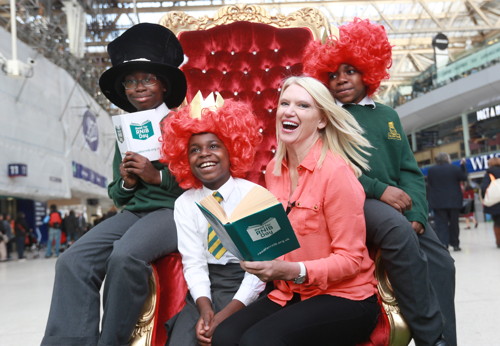 The mass story-telling event was held at Waterloo Station to celebrate Read for RNIB Day.

The Royal National Institute of Blind People invited rail passengers to visit a specially designed 'Wonderland' on the station concourse where they could record a passage from the book.

The finished 'talking book' will be available for customers of the RNIB's National Library Service to borrow.

Blind and partially sighted people face a significantly limited choice of books in formats they can read; just 7 per cent of all books are fully accessible. Read for RNIB Day aims to raise money to make more books accessible.

The charity issues around 5,000 talking books to blind and partially sighted people every single day and also produces and distributes books in braille and giant print.