Ł5m to bring Waterloo International rail platforms back into use

It could cost £5 million to bring all five disused platforms at the Waterloo International Terminal into use by domestic rail services, the Government has revealed. 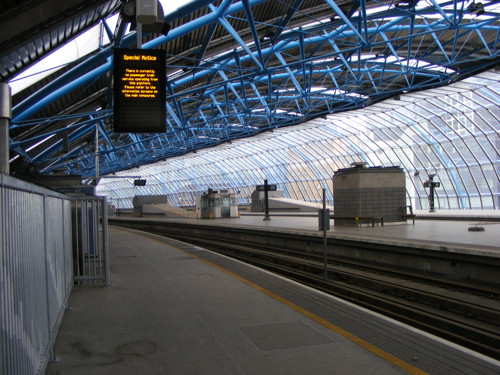 The announcement came in the same week that platform 20 received its first passenger train service in more than six years following a special agreement put in place between the South West Trains-Network Rail Alliance and the Department for Transport.

Starting this week, platform 20 can be used when needed to relieve congestion at the station during times of disruption. It will be used for scheduled train services from May 2014.

"This is the first step in our plan to provide extra capacity to and from the UK's busiest station by re-opening the former Waterloo International Terminal and delivering additional carriages on our busiest routes," said Tim Shoveller, managing director of the South West Trains-Network Rail Alliance.

"Over the coming months, we'll be completing our driver training programme and ensuring that all of our trains are ready for the full re-opening of platform 20 in May 2014.

"In the lead up to that, we have worked with the Department for Transport to successfully secure approval six months ahead of the full opening to help provide an improved service for our passengers.

"We operate one of the busiest commuter rail networks in Europe. Inevitably, due to the large volume of trains we run, there are times when our services are disrupted and Waterloo station becomes extremely congested. With nearly 95 million people passing through Waterloo station alone every year, having access to an additional, spare platform will allow us to help customers by reducing delays and providing greater flexibility to recover when things do go wrong.

"This is a great example of the innovative working by the alliance to deliver significant improvements for passengers."

Rail minister Baroness Kramer said: "This is great news for the thousands of commuters who use services in and out of Waterloo. Those of us who frequently use South West Trains will be delighted that the former Eurostar platform can at last be used to improve domestic journeys.

Earlier this week Baroness Kramer told the House of Lords that the estimated cost of bringing platform 20 back into use was Ł1.7 million. This figure differs significantly from the Ł2.9 million cost quoted by the then Labour rail minister Paul Clark in 2008.

"The short term solution for bringing platforms 21 to 24 back into use is currently estimated as costing Ł5 million; however this is subject to further development and design works," said Lady Kramer.

Former Eurostar platform 20 is adjacent to platform 19 in the domestic railway station so new access have been created by punching holes in the wall between the two parts of the station.

Passenger access to platforms 21 to 24 is more complicated as these 'island' platforms have no direct pedestrian link to the mainline concourse.

The rail minister added: "For the longer term, there is a requirement to enlarge the junction to enable Waterloo International to cope with more frequent trains as it was designed for the infrequent Eurostar service."

She reminded peers that Network Rail has already signalled its intention to bring forward a much bigger long-term scheme to expand capacity at Waterloo Station.

Lib Dem peer Baroness Kramer, who was recently appointed to the Government, has previously been outspoken on the subject of Waterloo's disused international platforms.

Two years ago she blasted the Department for Transport for failing to "gets its act together" to get trains back into Waterloo International which she described as a "huge, wasted asset".