Three years ago the Government spent £2.9 million converting one of the five former Eurostar platforms at Waterloo Station for use by domestic trains, but the platform has never been used, the House of Lords was told last week. 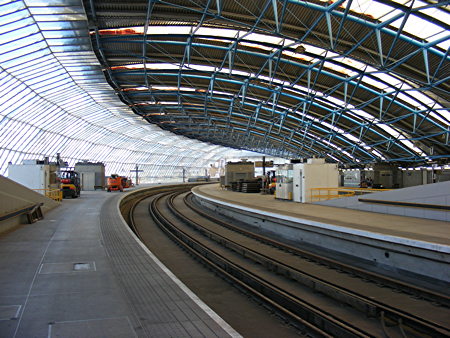 New gaps were created in the wall of the former international terminal to create a link between platform 19 and platform 20. New signs and information screens were also installed but no train has yet used the platform.

The farce was highlighted by Baroness Kramer in the House of Lords last week during a debate on the Localism Bill. Baroness Kramer, a former Lib Dem MP, was moving an amendment seeking to transfer responsibility for rail franchising in the capital to Transport for London.

Baroness Kramer argued that London rail passengers are ill-served by the current fragmented system of franchising controlled by the Department for Transport.

"If your Lordships want another quick example, just go down to Waterloo," she said.

"The next time you are stuck on a train that is slow because there is no space to get into Waterloo Station, you will see that there is an empty platform. When Eurostar moved to St Pancras, one of the international platforms was, at great expense to the Government, converted to domestic use.

"The department has never managed to get its act together to put that into play for passengers. That is another huge, wasted asset. Frankly, this is repeated all over London."

In November 2008 the then Labour transport minister Paul Clark said the cost of the conversion works at platform 20 was "in the region of Ł2.9 million".

The disused international terminal is currently being used for a second season of a theatre production of The Railway Children which is currently booking till next January.

BRB (Residuary) Ltd, the Government-owned firm which is responsible for the station, boasts that events in the building have raised almost Ł30 million for children's charities. Much of this total is accounted for by the two Ark charity balls.

"The Government wish to see the former international platforms at Waterloo station brought into domestic use," Conservative whip Earl Attlee told the House of Lords in July.

"DfT and Stagecoach Southwest Trains (SSWT) are currently in discussions to add capacity into Waterloo as part of the high level output specification (HLOS) programme.

"Network Rail is developing plans to accommodate longer trains at Waterloo. The infrastructure requirements for these trains will include bringing the former international platforms back into domestic use, subject to value for money and affordability constraints."

In January this year transport minister Theresa Villiers had given a firmer assurance, telling the Commons that "the Government are committed to ensuring that the former Eurostar platforms at Waterloo International terminal are brought back into use for domestic passenger services".

This summer Lambeth Council carried out a public consultation on a proposed development brief for the Waterloo International site.