Tributes to Nelson Mandela at Southwark Cathedral and South Bank

The Bishop of Southwark and the Mayor of Southwark took part in a ceremony held at Southwark Cathedral on Friday morning to mark the death of former South African president Nelson Mandela. 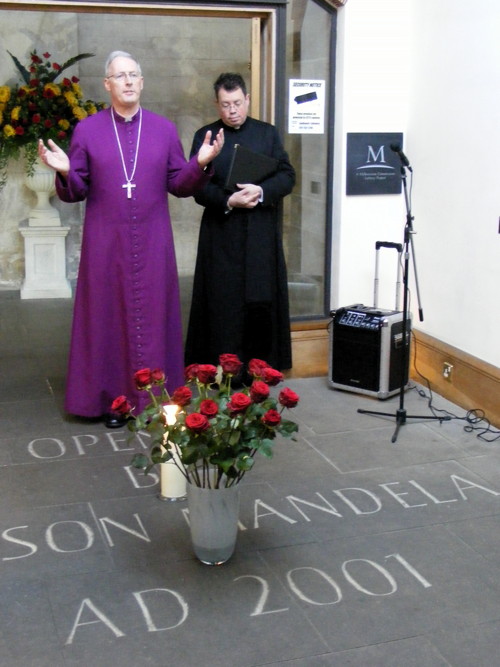 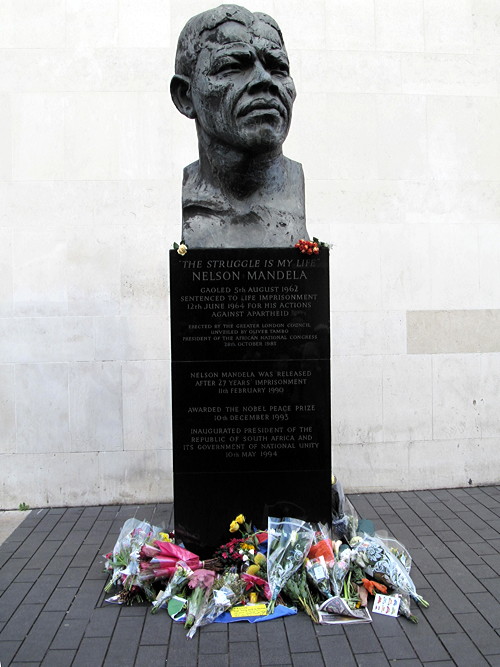 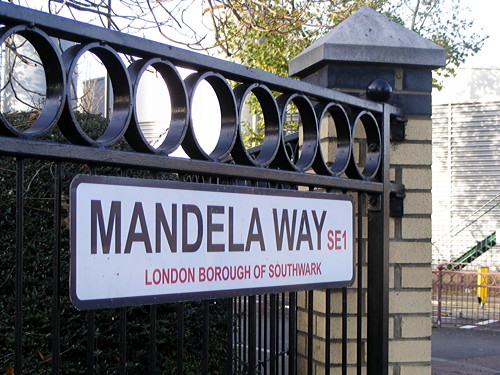 "I have so many memories of Nelson Mandela's influence on all our lives," said Dame Tessa Jowell, Labour MP for Dulwich & West Norwood.

Dame Tessa was speaking after a brief ceremony held in the Cathedral's north entrance where stones in the porch are inscribed with Nelson Mandela's name recording his visit in 2001.

"I think as Nelson Mandela's spirit is set free after his death it still belongs to all of us to inspire us and to direct us and to teach us the importance of courage and strong values that we will defend to any price and the importance of humility and modesty and recognising as we say in Labour Party that we achieve more together than we do alone."

The Dean of Southwark, the Very Revd Andrew Nunn, described Nelson Mandela as "an inspiration for the people of South Africa and for people everywhere" and recalled the former president's visit to the cathedral in 2001 as "a moment of supreme joy then and lasting memories".

"He showed us that the only way to truly live was to walk the path of forgiveness and reconciliation."

Bishop of Southwark, the Rt Revd Christopher Chessun, who quoted from President Mandela's inaugural address, said: "There are very few people who truly change the world. Nelson Mandela was one of those.

"Nelson Mandela led the most extraordinary change in South Africa by being strong and firm and outspoken in the face of the most incredible injustice. Speaking out against the evil of apartheid: he did it because he demonstrated the power of forgiveness and
shunned bitterness at great cost to himself.

"He did it by showing how to love rather than hate.

"He did it by allowing reconciliation to flourish in place of recrimination. He worked for a deep unity among the whole people of South Africa in an extraordinary partnership with Archbishop (Desmond) Tutu."

Mayor of Southwark Cllr Abdul Mohamed, who recalled visiting Johannesburg with his son, said: "I never thought when I was growing up that I would ever have the opportunity of going to South Africa because of the existence of apartheid."

Bishop's chaplain Mark Steadman read the passage from St Matthew Gospel recording Jesus's rejection of an 'eye for an eye'.

The ceremony concluded with prayers for the soul of Nelson Mandela, the people of South Africa and the work of reconciliation.

A display of South African flowers had been arranged early in the morning.

Among those placing roses in front of a burning candle were council leader Peter John, Chaucer ward councillor Claire Hickson and members of the cathedral staff.

Flowers were also laid in front of the bust of Nelson Mandela outside the Royal Festival Hall.

Sculpted by Ian Walters, the bust was unveiled in 1985 by ANC president Oliver Tambo.

Speaking in 2007, the then Mayor of London Ken Livingstone said: "The commissioning of this statue was symbolic of the wide support that existed amongst Londoners for the struggle against apartheid at a time when many in the media and the British government regarded Nelson Mandela as a terrorist."

At City Hall a minute's silence will be observed at the next meeting of the London Assembly.

Southwark Council is flying its flags on council buildings at half mast as a mark of respect. A book of condolence will be available at the council's offices at Queen's Road, Peckham and Tooley Street on weekdays from Friday, and at Peckham and Canada Water libraries over the weekend, for all residents who would like to pay their respects.