Colin Slee, Dean of Southwark, has died after a short illness and just a fortnight after his 65th birthday. 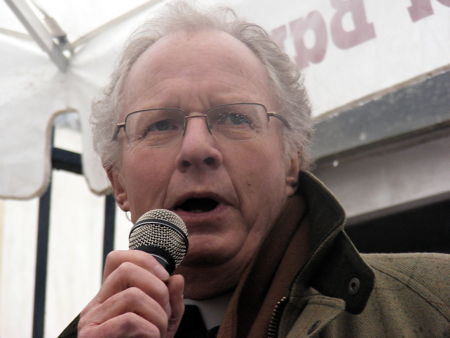 He came to Southwark in 1994 when as head of the cathedral he was known as Provost. He became the first Dean in 2000 after legislation introduced the title for all Anglican cathedrals.

But his riverside residence retained the name Provost's Lodging and there he was the only dean to look out of his window and see the 'wrong' cathedral.

Colin mischeviously enjoyed claiming that Southwark Cathedral was older and preferable to St Paul's. Southwark did better by, for example, not having an admission charge. When new floodlighting was installed he pointed out that it was more energy efficient than the lights across the water.

Although Southwark Cathedral was well-known from the radical days of so-called 'South Bank religion' it was under the leadership of Colin Slee, who had once been influenced by John Robinson's Honest to God, that it became a much visited church.

Colin spoke of having to manage success as he welcomed a Sunday congregation of hundreds representing a cross section of age, background and ethnicity.

At least a third of the congregation today is made up of local people walking to worship. This is certainly not the case at St Paul's.

Colin Bruce Slee was born on 10 November and educated at Ealing Grammar School, King's College London – where he enjoyed rowing on the Thames – and St Augustine's College Canterbury.

He was ordained deacon in 1970 and priest in 1971 to serve at St Francis, Heartsease, in Norwich. From 1973 to 1976 he was curate at Great St Mary's Cambridge and chaplain of Girton College.

In 1976 he returned to King's London as chaplain and tutor. For eight years from 1982 he was Sub Dean of St Albans Cathedral. Whilst at St Albans he showed his radical side by briefly and controversially displaying an SDP election poster. This caused a colleague to put up a Labour poster.

But it was after moving to Southwark that he became known to a wider audience. He soon became a member of General Synod and the Crown Nominations Commisssion.

Unlike most deans, Colin welcomed the cathedral being also a parish church as it grounded the chapter in the community. He enjoyed being chaplain of Shakespeare's Globe two doors along from his home. He was a trustee of the Millennium Bridge on the other side of his house. He also suffered difficult meetings as a Borough Market trustee.

He was a patron of Southwark Festival which attempted to highlight the local literary and artistic heritage before the area was fashionable. More recently he was a patron of the British School of Osteopathy.

He was an honorary lecturer at Harvard University and was delighted to further forge the Harvard-Southwark link during the 400th anniversary of John Harvard's baptism at the cathedral. But he could not resist suggesting that it was the narrow religious view of such emigrants which had given rise to the phenomenon of the USA's Neo-Conservative right.

In 2003 Colin Slee was awarded a Winston Churchill Memorial Trust Fellowship to visit South Africa and study the treatment of homeless people by those of other faiths in a Christian country. Whilst teaching at King's he had encouraged black students from South Africa to prepare for the call to lead their country.

Archbishop Desmond Tutu was a friend who often stayed with the Slees at Bankside and sometimes celebrated the Eucharist on Sunday morning. The visit of Nelson Mandela to the cathedral was a high moment as it not only recognised Colin's devotion to a free South Africa but was also the opening of the Millennium buildings which recreated the monastic sense of community he thought important.

More recently he allowed the beleaguered Zimbabwe prime minister Morgan Tsvangirai to use the cathedral for a rally of exiles. On Easter Day this year he persuaded many to postpone their lunch and join a demonstration outside Zimbabwe House.

A low moment for Colin came in 2003 when it fell to him one Sunday morning to announce that Jeffrey John, then Canon Theologian at Southwark, had asked for his nomination as Bishop of Reading to be withdrawn. There was an audible gasp from the congregation.

In 2001 Colin was delighted to be awarded the OBE and for the investiture by the Queen at Buckingham Palace he took the entire day off. He was greatly encouraged by Her Majesty's kind words about Southwark Cathedral.

The Queen had chosen to go to the cathedral on New Year's Eve 1999 on her way to the Dome for the national Millennium celebration. In 2006 she readily came back for the unveiling of the memorial to a Mohegan chieftain. Weeks later she arrived in great secrecy to record her Christmas Day message. On this occasion the Royal Standard was not flown from the tower.

Four years ago he formed an alliance with the then Mayor of London Ken Livingstone to campaign against the prospect of a lapdancing club in Tooley Street. The cathedral had previously opposed the granting of a licence for the Wicked fetish club underneath London Bridge.

The Dean's uncompromising style sometimes caused problems locally. His handling of the cathedral's plans to redevelop the All Hallows site in Copperfield Street contributed to a falling-out with Simon Hughes MP and the formation of a vigorous community campaign against the proposals.

Colin's humour could be misunderstood. Once on leaving Winchester Cathedral his host said "Do come again". "I shall," replied the Dean, "I am looking forward to attending your bishop's funeral." The astonished canon was unaware that the bishop had just presided at a judicial hearing which had gone against Colin's view.

On another occasion a member of the congregation was shaken to hear the dean exclaim "Oh! he can boil himself in oil" at the mention of a well-known MP.

The Dean was often said to be too controversial to become a bishop but twice he was near to being one. Only three years ago went to New Zealand to consider an invitation.

Even Colin's opponents in the great debates are sad at his passing. "The Church won't be such fun," was the reaction of one.

Colin is survived by his wife Edith, whom he married in 1971, and a son, two daughters and a foster son and daughter who are brother and sister.

• The Funeral Eucharist for Colin Slee will be held at Southwark Cathedral on Saturday 4 December at 11am.