A Mayor's Question Time session of the London Assembly was adjourned twice on Wednesday morning after campaigners protesting against a police crackdown on rough sleeping interrupted the meeting. 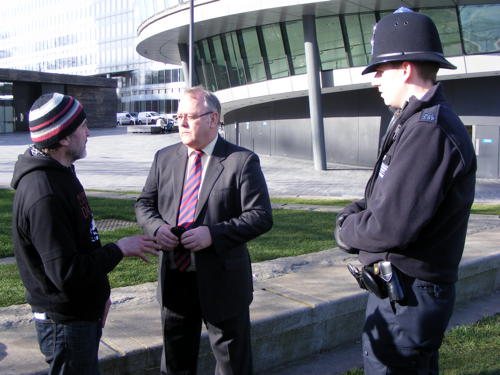 A group of 'homes not jails' campaigners pitched a tent in Potters Fields Park on Tuesday night as part of their protest in the run-up to the City Hall meeting.

The operation has been branded by opponents as a "hideous campaign criminalising some of the most vulnerable people in our city".

Launching the operation, Commander Alison Newcomb said: "The MPS's priority is to ensure London's streets are safe for all.

"We are committed to working alongside our partners to reduce the number of those sleeping rough and begging, which can lead to associated anti-social behaviour and crime.

"We recognise that some of the people we engage with are vulnerable which is why we are encouraging them to access services to gain the support they need, while taking affirmative action against persistent offenders who break the law or cause intimidation to passing members of public."

Mayor of London Boris Johnson was questioned about rough sleeping in the capital during Wednesday's meeting. He said: "It is not going away. We've got to be honest about it.

"The majority of them are non-UK nationals but that in no way undermines the severity of the problem.

"What you've got to do is to stop them becoming habituated."

Last month we reported on the use of 'WIP orders' by Network Rail and the British Transport Police to ban persistent rough sleepers from Waterloo Station.

In a separate initiative launched earlier this month, King's Health Partners held an event at Guy's hospital to showcase their new approach for treating homeless people in south London.

According to KHP, a quarter of England's homeless people live in Westminster, Lambeth and Southwark.

Staff at Guy's Hospital, St Thomas' Hospital and King's College Hospital can refer patients who are homeless – or at risk of homelessness – and who may need help with their health, housing or social needs to a new 'pathway' team.

The new multi-disciplinary healthcare team will ensure that homeless patients have somewhere safe to go when they're discharged from local hospitals and will reduce the number who leave hospital against medical advice and have to be re-admitted.

Project lead Samantha Dorney-Smith said: "The pathway team aims to give homeless people the best possible hospital experience and ensure that when they are discharged, they receive the ongoing support they need. We know that integrated care for homeless patients is better and more cost effective for the NHS."