For the third year Southwark Cathedral is marking the season of Lent by exhibiting thought-provoking large-scale works of art. 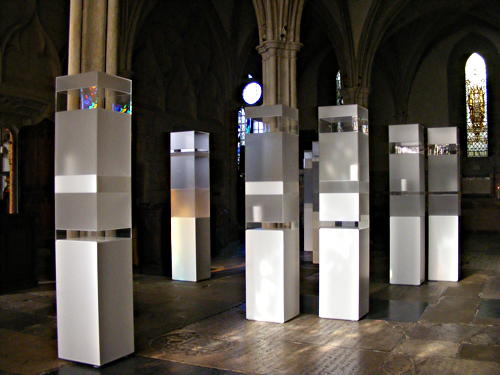 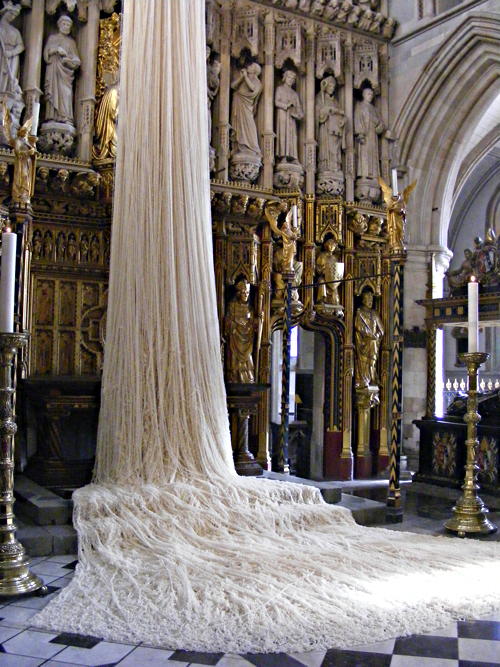 This year Southwark Cathedral is hosting two installations during Lent, the Christian season of penitence and fasting that began this week on Ash Wednesday and leads up to the festival of Easter.

The pieces are by Edmund de Waal and Angela Wright who both live and work within the Diocese of Southwark.

The installations are part of an emerging new tradition at the cathedral: two years ago it hosted David Mach's 'Die Harder' piece whilst the 2013 Lenten installation was 'Christ Rests in Peace' by Nic Fiddian-Green.

They stand in a serpentine line in the retrochoir at the east end of the cathedral. The artist described his work as an "…attempt to make you pause, to stand still and listen in this vast building, to contemplate the changing light and shadow of the space and to reflect on a thousand years of liturgy."

Angela Wright's piece is entitled '40 days' and is made from spun wool.

It is suspended below the east window of the Cathedral, a drop of some 50 ft, covering the altar screen. Wright said that she hopes that "visitors will look up at its mass and the spillage of its myriad wavy strands tumbling down to the stone floor, its colour, smell and softness will engage with the senses".

"We are delighted that we will have two art works – 'another hour' and '40 days' – to accompany our journey from Lent to Holy Week and Easter," said the Very Revd Andrew Nunn, Dean of Southwark.

"These events in the life of Jesus are lived almost in real time by the Christian community and especially in the final week before Easter.

"The encounter with the Living God is both in time and eternity and both of these works will help us to enter more deeply into this mystery and reality."

• Each artist will deliver a talk about their work: Angela Wright on Sunday 16 March and Edward de Waal on Sunday 23 March. The talks will begin at about 12.45pm, shortly after the end of the 11am Choral Eucharist.

• Whilst the art installations are in place the cathedral's resident cat, Doorkins Magnificat, has gone on a Lenten retreat. A message from the cat explaining her absence is on display next to her favourite chair in the retrochoir. She will return to the cathedral at Easter.