An art installation in the form of a dark cloud has been placed above the high altar sanctuary of Southwark Cathedral as the tradition of contemporary art installations during the season of Lent reaches its seventh year. 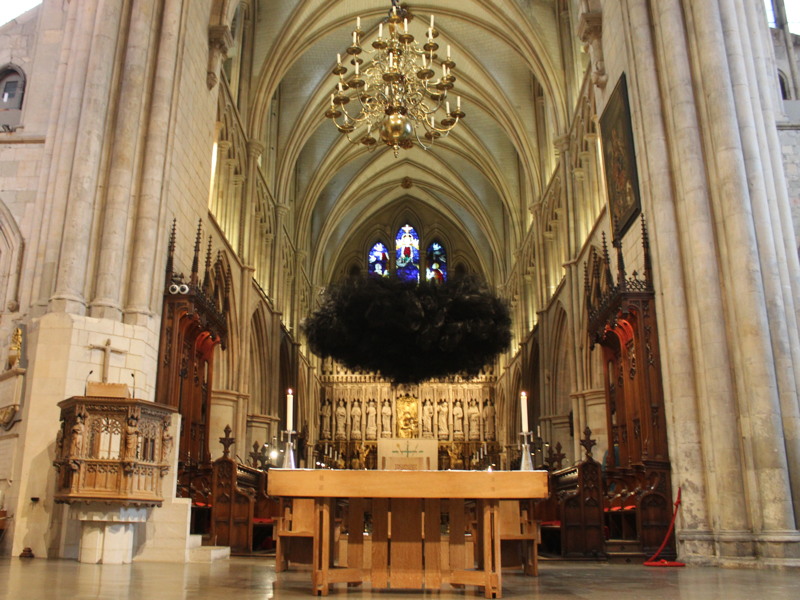 This new site specific installation is created in direct response to Southwark Cathedral and the lofty spaces within it. Doubt fills the volume of air above the high altar sanctuary like a dark cloud.

Doubt was conceived through the connections of the weight of darkness and uncertainty suspended from above and stems from a conversation Susie had with a soldier who had served in Afghanistan at the time she was installing Cloud in The Great Hall in Winchester.

The soldier spoke about the feeling of a dark weight hovering behind his neck all the time he was in the war zone, which made Susie think of the 40 days and 40 nights of Lent.

Susie's work encompasses drawing, sculpture and architectural installations. A former classical musician, she retrained as an artist, graduating with an MA in Fine Art in 2001.

She now has an international exhibition profile, showing regularly in the USA and Europe as well as in the UK.

"Clouds feature a great deal in scripture and in the Christian tradition," said the Very Revd Andrew Nunn, Dean of Southwark.

"Popular imagination might expect faith to be lived out in bright clear sunshine but from that moment when Moses climbed the holy mountain, shrouded in cloud, and experienced the presence of God, it has been a familiar experience and theme.

"The Gospel writers described a similar event in the Transfiguration of Jesus and as Jesus died on the cross the clouds brought night into day and the onlookers were plunged into darkness.

"The medieval mystical tradition in this country did not shy away from the cloud which can exist in the world of faith. In 'The Cloud of Unknowing', a 14th century book written anonymously, the writer says 'Beat with a sharp dart of longing love upon this cloud of unknowing which is between you and your God.'

"The cloud which Susie MacMurray is creating, and which will dominate the chancel and high altar sanctuary during Lent and Holy Week, draws us into this apophatic tradition. We recognise our doubts and sense the darkness but beat both 'with a sharp dart of longing love.'"

• Southwark Cathedral is open daily and is free to visit.