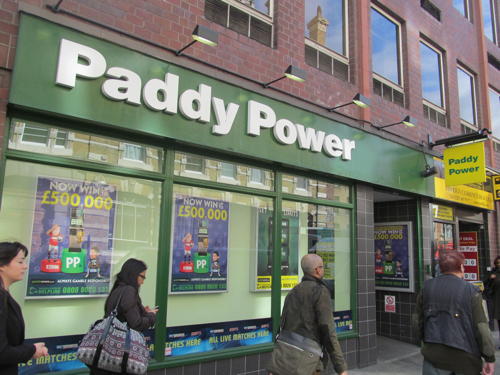 Paddy Power is one of three betting shops in Borough High Street. Coral and William Hill have branches close by.

Borough High Street is one of six areas in Southwark identified as having clusters of three or more betting shops.

Southwark Council leader Peter John announced last summer that he would ask the borough's planning committee to make an 'article 4 direction' to restrict change of use and the order came into effect in the autumn.

Unless special policies are invoked by a council, payday loan shops and bookmakers do not require planning permission to open in premises formerly occupied by a restaurant, pub or takeaway.

Last October the council removed this permitted development right and require anyone proposing to open a financial services business in a former food and drink establishment on a high street to seek planning permission.

Next week Southwark's planning committee is expected to rubber-stamp the introduction of the tighter policy.

Papers published for the planning committee meeting reveal the lengths to which betting shop chains have gone to to block the council's move.

Solicitors acting for the Paddy Power chain – which has a branch in Borough High Street – sent a letter to Southwark Council last October threatening legal action.

The notice of a proposed claim for judicial review set out Paddy Power's argument that the planning committee had not been properly advised when it made its immediate article 4 direction last October.

In separate correspondence Ladbrokes – which has branches in Blackfriars Road and Tower Bridge Road – accused the council of adopting a "wholly disproportionate measure for which there is no reasonable justification for both its purpose and extent".

The Association of British Bookmakers criticised the council for taking "draconian action" and said that "there is nothing about the number or concentration of betting offices in the borough which marks it out as exceptional or so exceptional that a blanket abrogation of permitted development rights is necessary".

Southwark's use of the article 4 direction was highlighted in the House of Commons by planning minister Nicholas Boles earlier this year.