The Mayor of London joined Metropolitan Police officers for a road safety operation at the junction of Tooley Street and Tower Bridge Road on Tuesday morning. 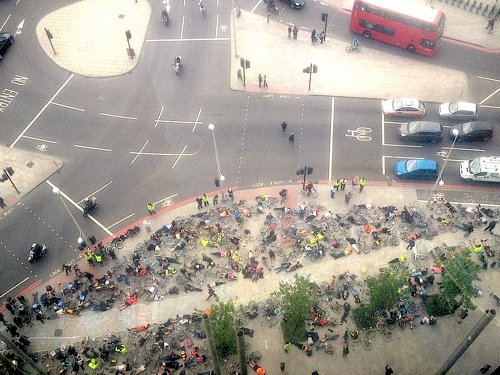 Last Wednesday the Stop Killing Cyclists campaign chalked a cycle lane onto the pavement at Elephant & Castle as part of a protest held in the aftermath of the death of Abdelkhalak Lahyani. Photo: Julian Adamoli

New figures published by City Hall show that there were 475 serious injuries to cyclists in London in 2013, compared with 657 in 2012.

Part of the reduction was has been attributed to the Metropolitan Police's Operation Safeway which ran in November and December. Hundreds of officers were placed on street corners, targeting dangerous and unlawful behaviour by lorry drivers, motorists and cyclists.

Mayor of London Boris Johnson has announced that similar, but smaller-scale, police operations will be mounted across London for two days every month, running indefinitely.

Mr Johnson said: "Whilst these new figures are encouraging and a real move in the right direction one death or serious injury is one too many. That is why I am building new, protected cycle routes and better junctions, the first of which will be delivered this year.

"It is why I intend to ban all lorries not fitted with cyclist safety equipment from London. It's why we are investing the thick end of £1 billion on cycle safety and infrastructure. And it is why I am today confirming 'Son of Safeway' police operations to maintain the improvements in behaviour we have seen from all road users."

Donnachadh McCarthy, one of the founders of the Stop Killing Cyclists campaign which organised last week's direct action protest at the Elephant & Castle, said: "The Mayor rather than staging photo-stunts should sort out the mess his traffic enforcement schemes are in.

"Police resources should be targeted at the truly alarming levels of lethal trucks being driven on London's roads.

"Whilst he fiddles, cyclist and pedestrian lives continue to be endangered by dangerous trucks being driven illegally on London's roads and children are forced into the path of double-decker buses by inconsiderate drivers parked on unenforced cycle-lanes.

"Operation Safeway failed on both counts and the Mayor and Metropolitan Police must ensure future operations do not mimic this flawed approach."

The London Cycling Campaign's chief executive Ashok Sinha said: "We can all be careless if we don't make an effort not to be, but when we're driving such carelessness can kill – that's why it's a crime, and the law should be enforced.

"We welcome more traffic police on our streets, but they must use their powers to tackle carelessness, which is the biggest single factor in the deaths and injuries of thousands of cyclists in London every year."