Mayor of London Boris Johnson and Southwark Council leader Peter John have called for the owners of a block of flats to remove controversial spikes designed to deter rough sleepers. 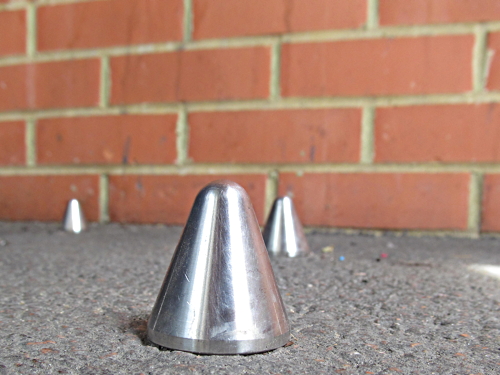 The spikes have appeared in the past few weeks in the entrance of 118 Southwark Bridge Road, a block of flats originally developed by Galliard Homes. Images of the spikes were shared widely on social media over the weekend.

Galliard sold the building in 2009 and the freehold is now owned by a company set up by residents.

"The Mayor believes these spikes are ugly, self defeating and stupid," said a spokeswoman for Mayor of London Boris Johnson.

"Southwark Council is investigating, which is the right thing to do, but the Mayor is clear, the developer should see sense and remove the spikes immediately.

"There are far better ways to tackle rough sleeping on London's streets. The Mayor has invested over £34 million in schemes to tackle the issue, like No Second Night Out, resulting in three-quarters of rough sleepers only spending one night on the streets. He will continue to work alongside the government, boroughs and key agencies to reach people in need of support."

More than 5,000 people have signed a petition calling on the Mayor to intervene.

Other London political figures have been quick to join the debate.

"These spikes are an inhumane and callous reaction to a growing problem of rough sleeping under Boris Johnson's watch," said Baroness Jones of Moulsecoomb, a Green Party member of the London Assembly.

"Instead of trying to deter people who are in a desperate situation, these building owners should be contacting homeless services to ensure anyone sleeping rough on their land is helped.

"I shall ask the Mayor to contact the building owners about removing the spikes and linking up with his No Second Night Out initiative. He also needs to face up to the rising numbers of rough sleepers in London, and lobby for the housing and welfare safety net to be repaired. With such insecure tenancies, cuts to benefits and cuts to homeless services, more and more vulnerable people are ending up on our streets."

Cllr Peter John, leader of Southwark Council, said: "Anyone who is sleeping rough deserves to be treated with compassion and respect – not spikes.

"This is why the council has a dedicated officer working with a number of homeless charities in the borough to find them shelter and the right support.

"Southwark Council is not involved with the installation of the spikes outside of the property at 118 Southwark Bridge Road and we do not feel this is the best way to deal with the problem.

"The spikes were not part of the original planning application for the building but would be considered too small to come under planning regulations, however we will continue to see if there is anything within the council's power to get these measures removed or an alternative solution found."

The ground floor of the building is occupied by the British School of Osteopathy's clinic, opened by the Princess Royal in 2008. The school has acted quickly to distance themselves from the installation of the spikes.

"We are shocked that the name and reputation of the BSO has been associated with this action," said Charles Hunt, the BSO's principal and chief executive.

"Our commitment to supporting people who are homeless is strongly embedded within the school, and we will continue to do everything in our power to provide our free services to the people who need it."

The BSO provides free osteopathic treatment at the Manna Centre for homeless people near London Bridge.