Plans for a 14-storey tower in Union Street, including 55 homes and new premises for the London Centre of Contemporary Music, have been approved by Southwark councillors. 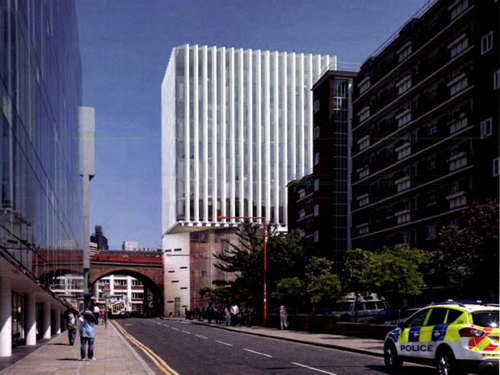 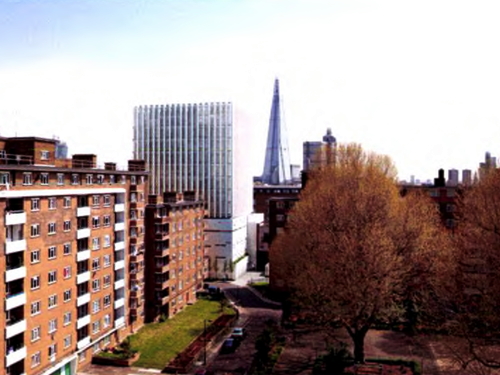 The development will occupy the site of the recently demolished Octavia House building opposite the Travelodge London Southwark hotel.

The proposed building is 44 metres tall – 10 metres shorter than the nearby Palestra office building. Of the 55 homes proposed, 14 will be 'affordable'.

The scheme would enable the London Centre of Contemporary Music, currently based elsewhere on Union Street, to expand from 240 to 500 students and double the size of its full-time staff to 25.

The development would provide the LCCM with a basement plus four floors including a multi-functional space in the basement that can be used as a performance venue.

The National Jazz Youth Orchestra will relocate to the new building from its current Westminster base.

Planning officer Yvonne Lewis told Southwark Council's planning committee on Tuesday night that the design by Spparc Architecture is "distinctive and dynamic" without being "overbearing or unduly dominant".

She described the LCCM's new premises as "a welcome addition to the cultural mix of Bankside" and "potentially an exciting building".

Michael Tsoukaris, the council's design and conservation manager, called the scheme as "a touchstone for the area" that would serve as a landmark on the pedestrian route between Southwark Underground Station and Tate Modern.

Objectors to the scheme included the council's own conservation areas advisory group which said the design was "inhumane, harsh ... overly self-referential and alien to the North Southwark context".

Planning barrister Trevor Standen, representing local residents, said that the development would create "an undue sense of enclosure" and that more than 600 neighbours would be affected by the proposed building.

He argued that if the council approved of the scheme, nearby residents would have grounds to seek judicial review on the grounds of inconsistent decision-making by the authority.

He claimed that In other nearby schemes the council had required developments to 'step down' in height to better relate to neighbouring buildings.

LCCM's co-founder Darius Khwaja told councillors that the proposed new building would enable the centre to expand from being a music college to a centre for creative media, including writing and software development.

"LCCM is a great local success story and the Music Box will give it a permanent home in Southwark," he said.

Cathedrals ward councillor David Noakes told the meeting that he supported LCCM's continuing presence in the area but did not consider that the scheme and its location met the borough's policy criteria for tall buildings.

"We can and should be doing better for Southwark, both on behalf of residents and how we develop this borough," he said.

The scheme was approved by five votes to three.