The Mayor of London has claimed that collisions involving cyclists at the Elephant & Castle's southern junction have been cut by 75 per cent since the roundabout was removed. 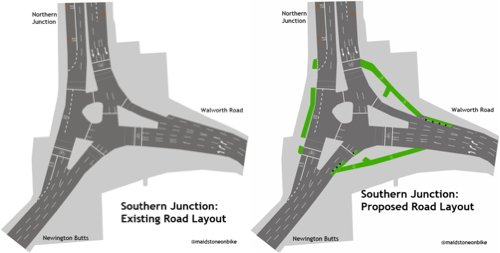 Boris Johnson was responding to a question tabled by Liberal Democrat London Assembly member Caroline Pidgeon in the light of the death of Abdelkhalak Lahyani in May this year.

"The tragic collision to which you refer took place at the southern junction at Elephant & Castle," said Boris Johnson.

"At this location in 2010-2011, a major transformational scheme was completed, which removed the previous roundabout.

"In the period since, a substantial reduction in collisions, including a 75 per cent reduction in those involving cyclists has been recorded.

"However, there is no place for complacency regarding safety and a lot of work continues in the area, involving developers and the London Borough of Southwark taking forward substantial cycling enhancements.

"At this specific location we are assisting the police with their investigation and are also considering specific design ideas that have been submitted by a cycle group."

In June the campaign group Stop Killing Cyclists submitted proposals to Transport for London for emergency alterations to the road layout at the southern Elephant & Castle junction.

Stop Killing Cyclists says that safe segregated cycle lanes at the junction's left-hand turns and safer routes for right-hand turns could be provided at low cost.

Fred Smith, the report author, said: "Implementing the signs, lines and small number of separators we propose would be straightforward, very cheap and, we consider, could be achieved within a week."

Donnachadh McCarthy, co-founder of Stop Killing Cyclists, said: "It has now been over two whole months since yet another cyclist was killed at the Elephant.

"Whilst we welcome the fact that the Mayor is considering the emergency safety plans submitted by us, there really is no excuse for the delay.

"Every day the Mayor sits on these plans is another day when thousands of cyclists passing through the southern Elephant junction are unnecessarily put at risk.

"The Mayor also now needs to ensure the proposals for the northern Elephant junction are revised so that all left-hand turns are protected and not just 50 per cent as proposed."

Last week the Mayor also reiterated his claim, first made in March 2013, that TfL is seriously considering a 20 mph speed limit on all the main roads around the twin Elephant & Castle junctions.