Tate Modern has retained its position as the world's most visited gallery of modern and contemporary art. 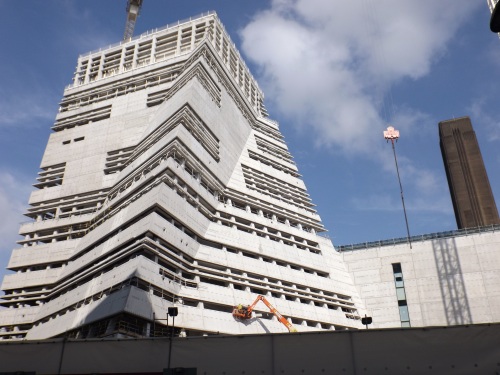 The Tate extension now ready for its brick cladding

The announcement was made on Monday morning by director Sir Nicholas Serota at the launch of Tate Report 2013-2014 at Tate Britain.

When asked about the slight drop in visitors, Sir Nicholas said that there were always fluctuations and the past year had seen the temporary closure of the tanks.

However, he predicted that the 2014-1015 figure would show a rise since Henri Matisse had received over half a million visitors making it the most popular exhibition ever held at Tate.

"We are delighted that so many people came."

Sir Nicholas confirmed that the Tate Modern extension will open on time in 2016.

"The building is more or less in its final form in terms of structure," he said, indicating that bricks and windows were about to be added.

On funding, Tate Trustees chairman Lord Browne said: "Around three quarters of the multi-million pound extension will come from donors around the world including the Eyal Ofer family foundation which recently made a gift of £10m."