Plans for a refurbishment and conversion of 14-storey Westminster Tower have been approved by Lambeth Council. 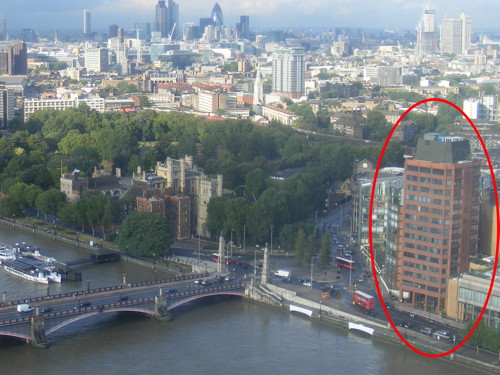 The planning applications committee considered the application for over an hour on Tuesday evening.

The office tower block on Albert Embankment was erected in 1983 with the plant at roof level.

New energy performance standards mean that the building cannot be relet after 2018. The new plant is to be relocated in the basement.

The building's height will not be increased as the site falls within the protected strategic view from Parliament Hill to the Palace of Westminster.

The conversion plan involves refurbishing the first three floors as office accommodation whilst the remainder is converted into a total of 34 residential apartments. Eleven are planned as being shared ownership.

Current tenants include Biteback Publishing. Among former tenants is Al-Jazeera television which is relocating The Shard.

The applicant claimed that some tenants on different floors had given notice that they wished to exercise a break in their lease due to the building's condition.

"We have lost around 45,000 sq metres in Waterloo and virtually the entire stock along Albert Embankment. Lambeth has planning policies to protect offices from loss."

Later he warned councillors: "You are being asked to approve the loss of an office full of small and medium sized businesses supporting the local economy in place of some swanky three bed flats."

Also appearing before the committee was nearby resident George Turner who said the proposal had hit a new low in the provision of affordable housing. He described the residential floors as "some of the most expensive real estate in the world".

"It is beyond belief that they (the developers) cannot provide more affordable housing."

He claimed that a promised independent viability assessment had not been provided for the meeting and questioned the prevalence of studio flats which might not meet space standards.

The agent, Hayley Ellison, said that the only viable redevelopment was the proposal before the committee. The mix of housing was derived through market conditions and in response to the need to deliver the maximum reasonable affordable housing.

The application was approved with five votes in favour and one against.