SE1 road safety campaigners, a pub which has raised thousands of pounds for charity and Shakespeare's Globe were among the recipients of this year's Southwark Civic Awards. 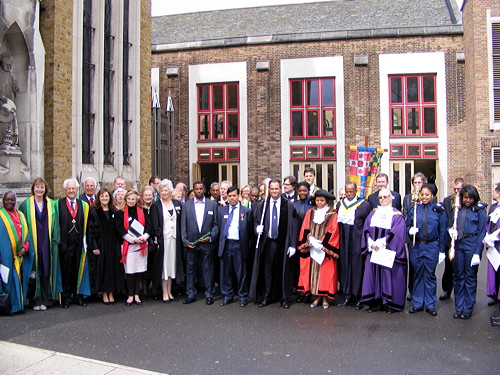 The civic awards ceremony was held on Saturday afternoon at St George's Cathedral. The Mayor of Southwark, Cllr Althea Smith, presided over the ceremony with the assistance of the deputy mayor and past mayors.

Rebekah Bostan collected a community initiative award on behalf of the Friends of the Mini Mints, the parent support group at the Mint Street Adventure Playground.

In the same category the parent-led SE1 Safer Roads campaign was recognised with an award collected by Victoria Diamond.

Darren Knight, chair of the Quay Players amateur dramatics society, was among those to receive a letter of commendation. The Quay Players, who rehearse at St Anne's Church Hall in Thorburn Square, also provided a musical interlude during the ceremony.

The Duke of York pub in Borough Road also received a commendation in recognition of its fundraising in support of the Royal National Lifeboat Institution. Over the past few years the pub's customers have raised around Ł13,000 for the lifeboat charity.

Among the recipients of the the Liberty of the Old Metropolitan Borough of Bermondsey was the Carragher Academy. Established more than a decade ago by sisters Sarah and Jessica Carragher, the academy runs Irish dancing classes at the Magdalen Hall in Purbrook Street.

Jeremy Leach, chair of Southwark Living Streets and the Walworth Society, was one of 10 people and groups awarded the Liberty of the Old Metropolitan Borough of Camberwell.

Albert Charlton, a long-standing volunteer with the patient advice and liaison service at Guy's and St Thomas' hospitals, received the Liberty of the Old Metropolitan Borough of Camberwell.

Patrick Spottiswoode, director of Globe Education, was part of the delegation from Shakespeare's Globe which collected the theatre's Liberty of the Old Metropolitan Borough of Southwark.

Elephant Jobs was also recognised for its work in North Southwark over more than three decades, including the fones4safety project.

The civic awards are organised by the Southwark Civic Association. Public nominations are invited each year.