A new artwork has been unveiled at Guy's Hospital in honour of those who have donated organs and helped save the lives of others. 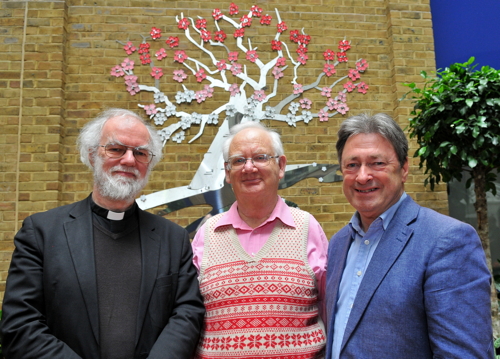 The artwork was unveiled on Easter Eve by Alan Titchmarsh MBE and blessed by the former Archbishop of Canterbury, Lord Williams of Oystermouth.

Created by Ted Harrison, an artist and kidney patient, the artwork marks 25 years since he received a kidney transplant at Guy's Hospital.

Titled The Cherry Tree, the artwork is made out of stainless steel and forms a cherry tree that also resembles a kidney. It is on display to patients, staff, and visitors in a ground floor atrium at Guy's Hospital, which is a leading centre for kidney care and carries out 200 kidney transplants each year.

Alan Titchmarsh, gardener, broadcaster, and novelist, said at the unveiling: "There is no gift that any human can bestow on another that is greater than the gift of life.

"The Cherry Tree at Guy's Hospital is a powerful symbol of gratitude to those who have donated their organs and a reminder to the rest of us what a difference such actions make."

Lord Williams of Oystermouth said: "This is a beautiful artwork honouring the generosity of organ donors.

"Organ donation is about bodies connecting with each other. Perhaps nothing is more important in society today than recognising that we are connected with one another. Easter is a particularly good time to remember these connections that make us a human family."

Ted Harrison, whose previous work includes the poppy installation at St Paul's Cathedral for Remembrance Day in 2011, said: "Designing The Cherry Tree has been poignant for me as it marks the 25th anniversary of my own kidney transplant at Guy's. I am amazed that my transplant is still going strong.

"Cherry trees also hold a special significance because a flowering cherry was planted several years ago in memory of my own donor. I was never told the name of my donor but I have corresponded with their family anonymously.

"I'm hugely pleased to have the chance to express in art my gratitude to the donor – the friend I never knew."

Geoff Koffman, the consultant transplant surgeon who carried out Ted Harrison's operation in 1990, still works at Guy's and St Thomas' and was also at the unveiling. He said: "Having operated on Ted 25 years ago, it's wonderful to see him in such good health and to witness the unveiling of this magnificent work of art.

"Huge advances have been made in kidney transplantation. In 1990 around 30 per cent of transplanted kidneys would be rejected by recipients' bodies, but that rejection figure is down to 2 or 3%. We now regularly see transplants lasting a quarter of a century or more.

Simon Hughes – Lib Dem candidate for Bermondsey & Old Southwark – added: "It was a privilege to be at this important and moving event to unveil new art by Ted Harrison: celebrating his 25 years as a successful kidney transplant patient of Guy's. The words spoken by Rowan Williams and Alan Titchmarsh were especially poignant, and everybody was moved by their contribution.

"The Cherry Tree artwork is an appropriate symbol for the new life organ transplants can give to individuals who otherwise would die or suffer a reduced quality of life if they survived.

"As one who has worked with and represented Guy's for many years, I pay tribute to Geoff Koffman and the world-class team of consultants, doctors, nurses and other staff who have saved an increasing number of lives every year.

"But, today's ceremony should not just be a celebration of the past. Organ donors are still needed in ever greater numbers for people in our borough and across the country.

"I am registered as an organ donor and I hope many others will feel able to do the same."

Anyone can join the NHS Organ Donor Register. Age is not a barrier to being a donor and neither are most medical conditions. More information can be found at www.organdonation.nhs.uk