The bells of Southwark Cathedral rang out on Saturday morning at 11am as part of a nationwide 'moment of noise' to mark the 70th anniversary of Victory in Europe (VE) Day. 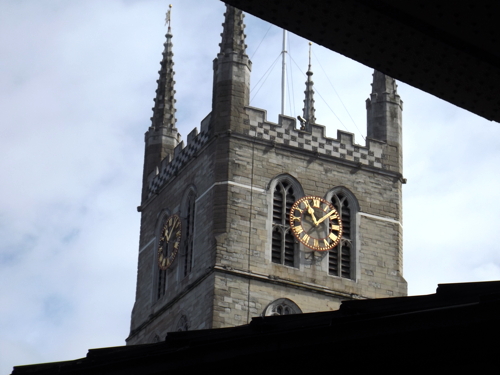 As well as peals of bells at cathedrals and churches, ships were asked to sound their horns at 11am on Saturday to mark the anniversary.

Saturday morning's 'moment of noise' is part of a three-day programme of commemorations.

On Friday afternoon a national two-minute silence began and ended with gunfire across the River Thames from the Tower of London.

At 9.32pm on Friday a beacon was lit at the Tower of London as the capital's official contribution to a national chain of commemorative beacons, the first being lit by the Queen at Windsor Castle.

At 1.15pm on Sunday the Red Arrows and the Battle of Britain Memorial Flight will stage a flypast above Horse Guards Parade. It is likely that the flypast will be visible in the northern part of SE1.

On Sunday afternoon members of Southwark Cathedral congregation will 'beat the bounds' of the parish before returning to the Cathedral for VE Day commemorations during Choral Evensong at 3pm.