Cllr Dora Dixon-Fyle was elected as Mayor of Southwark for the next year in a ceremony at Southwark Cathedral on Saturday lunchtime. 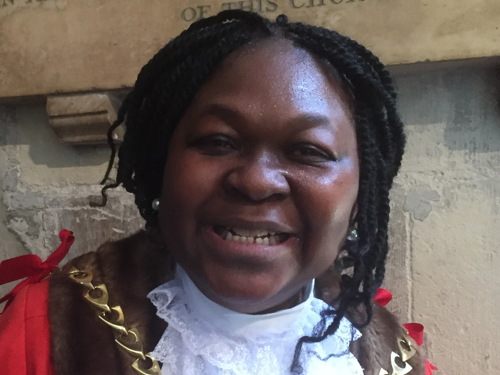 Cllr Dora Dixon-Fyle has been a Labour councillor for Camberwell Green since 1998 and most recently served as cabinet member for adult care, arts and culture.

She was elected as Mayor by unanimous vote of the council. Unlike in previous years, the Liberal Democrat group did not propose a candidate for the role.

Born in Freetown, Sierra Leone and a Southwark resident since the age of three, she has had a varied career which has included jobs in education, managing the constituency office of Harriet Harman MP and a small role in EastEnders.

"For me it has been a 15 year long apprenticeship to become Mayor and I would like to pay tribute to all the colleagues I worked with so far on my journey," said Cllr Dixon-Fyle.

"Southwark is my community – I've attended primary school here, got my first job in Rye Lane here, so I owe a lot to this great borough and I am very much looking forward to serving it in my new role as Mayor.

"I am particularly keen to begin raising money for my chosen charities, the Guy's Cancer Centre appeal and the British Red Cross, both of which are close to my heart.

"Just like for my own family, cancer is such a tragic illness for so many families and it will be a privilege to support the Guy's Cancer Centre project, which has the potential to help so many people especially in Southwark.

" I also look forward to doing what I can to help raise money for the work of The British Red Cross, a responsive and life saving global organisation helping people in crisis day in day out, most recently in Nepal, and previously in my birth country Sierra Leone during the Ebola crisis."

The outgoing Mayor – Cllr Sunil Chopra – has raised a record-breaking sum of nearly £70,000 for two homelessness charities during his term of office.

The money raised will be shared between The Robes Project winter night shelter and UK Homes for Heroes.