Council: we’ll work with locals to keep Foxtons out of Elephant

Southwark Council's regeneration boss has pledged to support a community campaign to prevent an estate agent from taking over the Elephant & Castle pub. 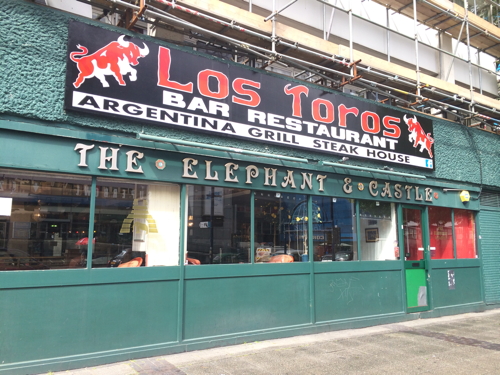 On Monday the SE1 website revealed the proposal by Foxtons to turn the Elephant & Castle pub at the corner of Newington Causeway and New Kent Road into an estate agents.

The story has since been followed up by the Evening Standard, City AM and ITV News London.

Now Cllr Mark Williams, Southwark's cabinet member for regeneration and new homes, has added his voice to the controversy.

"We have a clear vision for the Elephant & Castle, and with TfL we are creating a vibrant new square for London," said Cllr Williams.

"We want pubs, bars, restaurants and cafes so people spend time here rather than just pass through.

"An estate agents at this location is not part of our plan and we will work with the local community to stop this from happening."

The pub occupies a prominent spot overlooking the new Elephant Square public space due for completion in the early 2020s.

The council's planning department has so far received two comments from members of the public, although as Foxtons do not require planning permission to open in the former pub, it's not clear that these representations will be given any weight.

Foxtons will automatically gain consent for their proposal unless 21 local people put their names to an application to register the pub as an asset of community value under the Localism Act.

Meanwhile dance and clubbing website Mixmag has called for the pub to be considered for a blue plaque because of its role in the emergence of the UK garage music scene in the early 1990s.

The pub building is controlled by Valore Asset Management on behalf of private investors. According to the Valore website, they are considering adding an extra two floors of serviced apartments to the existing five-storey building.

What do you think of Foxtons' proposal?