Elephant & Castle pub to reopen as part of Antic group

'Under offer' signs have appeared outside the Elephant & Castle pub as plans to reopen the venue are announced. 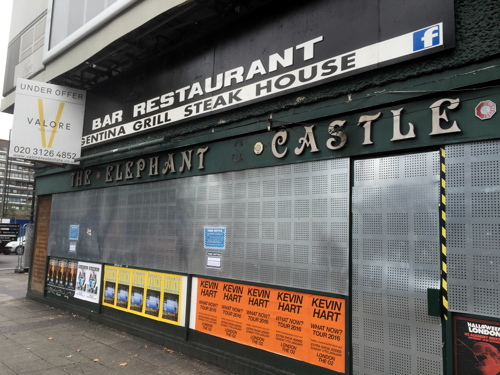 A pub called the Elephant & Castle has existed at the junction which now bears its name for at least 250 years.

A quarter of a millennium's history looked set to end earlier this year when the pub came within a whisker of becoming a branch of the Foxtons estate agents chain.

When news of Foxtons' plans was revealed by this website, the future of the pub became the subject of London and national media coverage.

The pub – at the corner of New Kent Road and Newington Causeway – had closed its doors earlier this year when its licence was revoked after a customer was stabbed in the head with a pen.

An application by the Walworth Society to register the pub as an asset of community value (ACV) under the Localism Act was accepted by Southwark Council, and the pub was put back on the market as a food and drink venue.

Meanwhile squatters moved into the pub as a protest against Foxtons.

This week the South London Press carried a licensing notice from Sunflake Ltd, a company linked to the Antic group of pubs, announcing its intention to reopen the Elephant & Castle.

Anthony Thomas from Antic said: "We are delighted to have secured the Elephant & Castle, a pub we have been keen to work some magic on for a few years now.

"It deserves to be at the very heart of this vibrant and unique community and we look forward to making it suitably Elephantine."

Cllr Mark Williams, Southwark's cabinet member for regeneration and new homes, added: "It is great news as we need to protect our pubs, and this will put a vibrant and busy community use back into the Elephant & Castle for local residents and visitors alike to enjoy."

Earlier this week Southwark's cabinet agreed a change to planning policy to give greater protection to pubs with ACV status where a change of use is proposed.

"During our campaign for it to be listed as an asset of community value we heard many stories about its special role as a meeting place for a wide variety of people from across South London and how keen they were for it to open again."

Antic's other Southwark pubs include The Sun of Camberwell and The Gregorian in Bermondsey.

Do you welcome Antic to the Elephant?