75 years after the Blitz, a plaque has been installed to remember the 20 people who were killed when the Ewer Street shelter was hit. 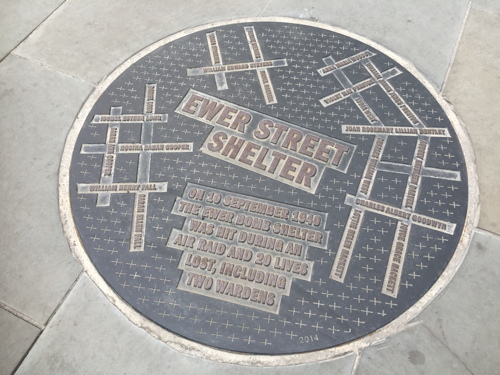 The plaque was installed earlier this year in the pavement outside the Pure Bankside student residence in Ewer Street as part of the Bankside Urban Forest project.

20 people – including two air raid wardens – died when the Ewer Street shelter was hit by a bomb on 10 September 1940.

The names of those who died at Ewer Street that night are recorded in the Civilian War Dead Roll of Honour at Westminster Abbey.

Across the road from the memorial to those who died in the air raid shelter is a new 'rain garden' and carved plaque recalling the location of the 17th-century Ewer Street burial ground.

The graveyard was disturbed during the construction of the railway line and hundreds of bodied were found in a 1980s archaeological dig.