Anyone who has passed the Elephant & Castle roundabout at night in recent weeks will have noticed a colourful glow coming from Michael Faraday Memorial at the centre of the roundabout. 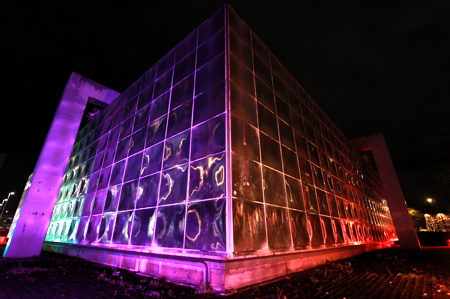 Southwark Council has installed multicoloured feature lighting around the Faraday memorial, replacing the system designed by winners of a competition held by the BBC's Blue Peter programme in the mid-1990s.

"The iconic building is a great hallmark of our borough and we are committed to maintaining its upkeep.

"Michael Faraday's work may not resonate with all residents so this is a great opportunity to celebrate his enormous achievements."

"It is a great time of redevelopment in Elephant and Castle and each strand of the regeneration scheme is geared towards making the area a more pleasant place for local residents to live with the creation of more local jobs and training opportunities and new cultural and leisure facilities."

The grade II listed Michael Faraday Memorial was designed by Rodney Gordon in 1960-61 to commemorate the Newington-born scientist's significant contributions to the study of electromagnetism and electrochemistry.

New digital advertising screens installed on the roundabout have been positioned to open up views of the memorial that were previously blocked by the previous static billboards; ad firm Primesight now markets the roundabout under the 'Southern Gateway' brand.

Dubbed 'Faraday Island' the scheme forms part of the Bankside Urban Forest, a series of public realm improvements for the area stretching from Tate Modern to Elephant & Castle.

Earlier this year Mayor of London Boris Johnson approved the release of Ł300,000 towards the cost of three Bankside Urban Forest projects including Faraday Island.

According to a City Hall document, the plans include an "outside event space for students and local people".

Earlier plans for the Elephant & Castle regeneration included the relocation of the memorial to a new site in Walworth and the creation of a large public square where the northern roundabout currently lies.

As well as its ongoing discussions with Transport for London about the future of the Elephant & Castle transport interchange, the council now plans to bid for enterprise funding from the Mayor of London for a scheme of small business incubator units which will help support improvements to the roundabout and its environs.