Waterloo Library in Lower Marsh will shut before the end of the current financial year after Lambeth's cabinet approved the borough's controversial 'Culture 2020' proposals for libraries and parks. 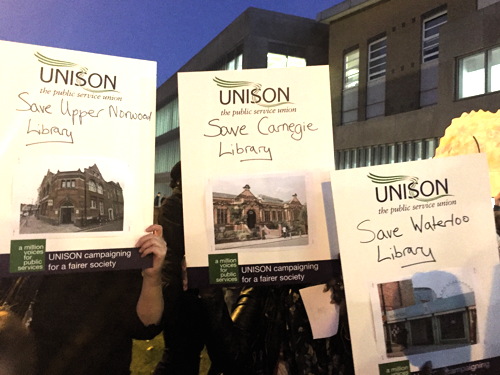 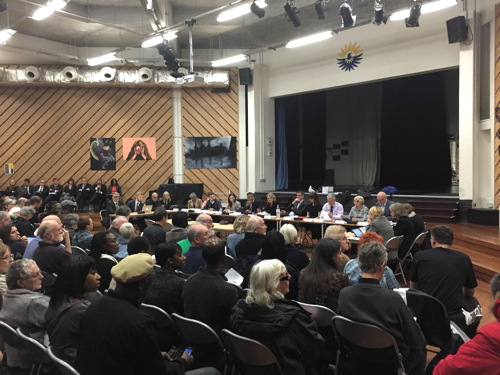 Lambeth's library service will lose around a quarter of its staff under the cost-cutting plans approved by the borough's Labour cabinet on Monday night.

Hundreds of people turned up at Dunraven School to protest against the council's plans.

Cllr Jane Edbrooke – cabinet member for neighbourhoods – was greeted by boos and hisses as she began her presentation on the proposed cuts to libraries and parks.

She said that the council had been placed in "an impossible financial situation" by central government cuts.

"If we didn't make these Ł4 million cuts to cultural services, that would mean Ł4 million extra cuts to other services across the council, for example ... foster placements, care packages for the vulnerable or domestic violence services," said Cllr Edbrooke.

Waterloo Library was only mentioned a couple of times during a stormy meeting that was dominated by the controversial plans to part-convert the Minet, Carnegie and Tate South Lambeth libraries into fee-paying gyms with a reduced library service.

Next May a temporary library is due to open at the Oasis Centre in Kennington Road – with longer opening hours than the current library – but it is unclear how that library will be staffed and funded in the longer term.

The new library is unlikely to have permanent on-site staff and will rely on self-service machines.

Lambeth Unison representative Tim O'Dell told the cabinet meeting: "We do not accept that the people of Waterloo would rather go to the Christian centre at Oasis than they would an open and free library – particularly as that's the area where the largest Muslim community in Lambeth resides."

It was left to Conservative councillor Bernard Gentry to make the case for investment in a library service for Waterloo. He said: "Bishop's ward provides more of the business rates in this borough than the rest of the borough put together.

"As we move on with all the new developments and all the new investment coming into the borough, not only will the business rates increase ... but also the council tax base will increase.

"I do think that at the moment it is premature to look at some of these [cuts] in places where the financial situation may well improve."

Lambeth council leader Lib Peck accused Cllr Gentry of living in "cloud cuckoo land" if he believed that regeneration in Waterloo and Vauxhall would solve the borough's financial problems.

The 'Culture 2020' proposals will also affect open spaces in Waterloo, including Archbishop's Park where the public toilets are under threat of closure. Some flowerbeds may also be covered in turf to save money.

The Friends of Waterloo Library have vowed to continue to fight the closure plans.