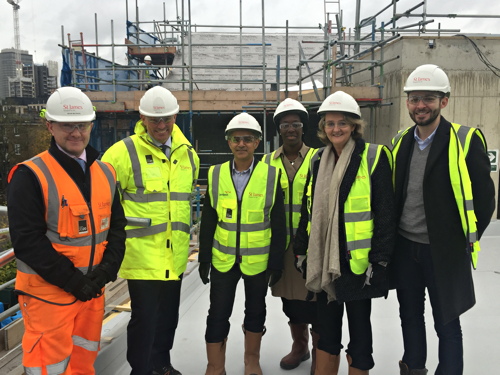 When plans for Merano Residences – the Rogers Stirk Harbour-designed 28-storey tower on the site of former government offices at Eastbury House – were first approved in summer 2012, the scheme included 14 shared ownership homes.

As part of that deal, St James is building eight council homes on Tyers Street in SE11 in a scheme which will also provide new offices and classroom space for Vauxhall City Farm.

The Merano Residences development itself is now 100 per cent private and homes are for sale at up to Ł5 million.

Labour mayoral candidate Sadiq Khan told the SE1 website: "I'm looking for examples of best practice and here in Lambeth there is the political will to make sure homes are built for local residents.

"I was keen to come along to see how they've managed to get the best deal for local residents, persuaded developers to build the right sorts of homes and negotiated on behalf of local residents.

Mr Khan said that if elected to City Hall next year he will set up a 'Homes for Londoners' agency to broker new housing developments.

Lambeth Council leader Lib Peck added: "As a planning authority we have been very clear that we want wherever possible to build [affordable housing] on-site – that is our preferred option – but we do have to realise that that sometimes doesn't give us as good a deal.

"I think this particular development illustrates that. We are in the process of building 14 [sic – there are eight] homes here – really decent family size – and we've also been able to give some of the benefits to Vauxhall City Farm.

"So I think you've got a strong, principled framework for how many affordable homes you want to try and develop – which is 40 per cent in our case – you want those on-site, but you obviously have to have the flexibility to make sure you are getting the best deal."

St James was one of the developers which paid for Lambeth Council to take part in the controversial MIPIM property industry fair in Cannes earlier this year.

The developer also part-funded a picture book extolling the benefits of the Vauxhall regeneration that has been distributed to all primary school pupils in Lambeth.

On Monday Lambeth's cabinet is expected to agree plans to build more new council homes on the Westbury Estate near Wandsworth Road station which will be part-funded by another St James development on Albert Embankment more than a mile and a half away.