A previously unknown portrait of Edward VI, only son of Henry VIII, has been discovered hidden in the art collection of Guy's and St Thomas' Charity. 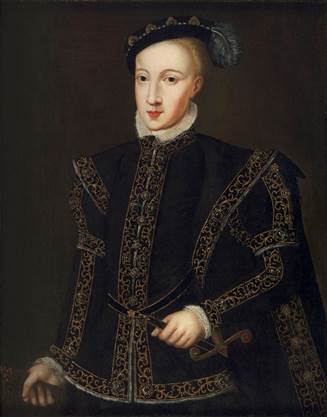 The portrait is now on display at the Florence Nightingale Museum as part of a special exhibition titled Hidden Treasures from the Hospital Vaults: The Remarkable Art Collection of Guy's and St Thomas' Charity.

The exhibition showcases precious and fragile items of the charity's collection that have never been displayed in public before.

The delicate portrait of Edward VI, who re-established St Thomas' Hospital after the Reformation in 1553, derives from an official full length portrait by William Scrotts.

Expert tests suggest it was painted just after Edward's death, at the age of 15. Tree-ring dating of the wood that the portrait is painted on shows that the tree the board came from was felled in Edward's lifetime around 1539.

Other pieces on display for the first time include a gold memorial ring made for Thomas Guy's funeral, 18th century silverware, a series of curious short films from the 1950s commissioned by the Ministry of Health to train physiotherapists, as well as artworks by Dame Elizabeth Frink, Albert Irvin, Patrick Caulfield and Robert Motherwell and other renowned 20th century artists.

"We are delighted to be able to share some of the treasures from the history of our hospitals with visitors to the Florence Nightingale Museum," said museum director Natasha McEnroe.

Peter Hewitt, chief executive of Guy's and St Thomas' Charity, added: "Our rich fine art collection forms a unique resource that we use to enhance the wards and public spaces for the benefit of patients, staff and visitors.

"It contains many objects of beauty and curiosity, but perhaps none as special as this portrait of Edward VI, that was thought to be lost but was found, restored and it is now on display for all to enjoy. "

• The exhibition continues until Sunday 27 March.