A dignified gathering of family, friends, colleagues and dignitaries filled Southwark Cathedral on Tuesday to mourn, honour and celebrate the life of Sam King MBE. 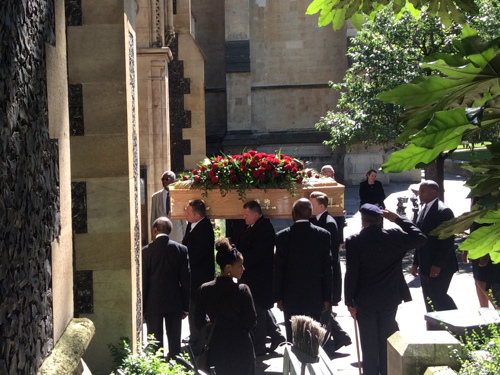 Four generations of family took part. Rarely can so many of the clerical participants have been family members. The sermon was delivered by grandson-in-law Pastor Alton McDonald and the eulogy was given his son The Revd Michael King. There was a musical contribution from great grandson Samuel and a reading, with his father, by great grandson Elijah.

Dean of Southwark, the Very Revd Andrew Nunn, spoke of Sam as a "Man of history". Family friends spoke of the importance of Sam's deep faith which was the foundation of his family life.

The Rt Hon Harriet Harman and former Southwark mayor Aubyn Graham JP represented the political and civic engagement which inspired the greater involvement of black people in the Labour party and in Southwark affairs.

Mrs Diedre Mills, Acting Jamaican High Commissioner, recognised his international importance as a representative of Jamaica. Arthur Torrington recalled the foundation in 1993 of the Windrush Foundation to record the history of those who arrived from the Caribbean in 1948.

Sam King was born in 1926 in the Portland Hills in Jamaica. In 1944 he volunteered for the RAF and crossed the Atlantic to start service. After his return to Jamaica at the end of the war he responded to the advert for the crossing of the Empire Windrush and returned to England. Eventually he joined the Post Office. He often turned obstacles to success: the unwelcoming signs 'no dogs, no Irish, no blacks' meant that families clubbed together to buy properties which has stood them in good stead.

He valued education for all, was an effective school governor and ensured that 'Section 11' monies were made available to improve the educational attainment of black children.

He became the first black mayor of Southwark in 1983: the first Jamaican outside of Jamaica, to become a Mayor of any town, parish, district or county in the world. Many learned of his life through study in Black History Month.

While he was mayor, Sam brought the BBC's Songs of Praise to Southwark cathedral; the first time a gospel choir was featured on the programme.

The first fund raising event for the Windrush Foundation was also held at the cathedral. Sam Wanamaker, who had battled Southwark Council for the site of Shakespeare's Globe, was also present at that occasion.

Sam King was made MBE in 1998 and in May this year he was honoured with the Freedom of the Borough of Southwark.

The deeply Christian and intelligent man, who never spoke a bad word about anyone, leaves a huge legacy within the Caribbean community today.

The Borough of Southwark was well represented by the Mayor, Cllr Kath Whittam, several former Mayors, and council staff. The final Commendation was made by the Bishop of Southwark, Rt Revd Christopher Chessun.