Lambeth's cabinet has approved proposals for a Public Space Protection Order (PSPO) to combat illegal gambling on Westminster Bridge and around the South Bank. 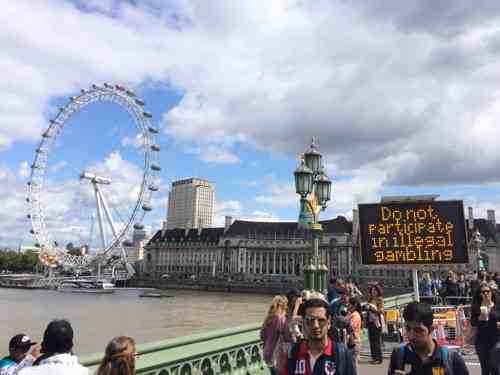 For several years Westminster Bridge has been targeted by gangs running games designed to extract money from tourists.

We reported last month on plans by Lambeth and Westminster councils – in tandem with the police on boths sides of the river – to introduce two Public Spaces Protection Orders (PSPO) to give police extra powers to clamp down on people trying to fleece tourists by running games of chance.

The effect of the PSPO will be to make it an offence to engage in street gambling and gaming, with a potential fine of Ł1000 or a fixed penalty notice of Ł100.

On Monday night Lambeth's cabinet approved the PSPO for its side of the river.

Whilst the gambling itself is illegal, the council says that some of the linked antisocial behaviour is not. Examples cited in a council report include large groups blocking the bridge, people being forced into road to avoid games and the crowds they attract, and verbal abuse and threats of violence.

Cabinet members were shown witness statements describing a tourist having Ł40 physically taken from their purse, someone losing more than Ł200 to illegal street gambling on the bridge that he felt he was forced to take part in, among numerous reports of intimidation and aggression.

Acting Chief Inspector Lance Lamnea of Lambeth Police addressed cabinet to urge the councillors to approve the order. "To say it's a big issue is an understatement," he said.

He explained that sometimes as many as 50 police officers from around Lambeth were called on to deal with gamblers on the bridge, at a cost to the public purse of "tens of thousands of pounds".

The PSPO is due to come into force on 31 October and remain in force for three years.

Kristian Aspinall, Lambeth Council's lead commissioner for crime and disorder, told cabinet that Lambeth's collaboration with the City of Westminster was the first time a cross-border PSPO had been introduced.

He said that if successful, the measure is likely to be extended to other central London bridges by neighbouring authorities including Southwark Council and the City of London Corporation.

He explained that as well as Westminster Bridge and the Golden Jubilee Bridges, the PSPO will cover a wider area to prevent the gamblers simply moving their operations to the end of the bridges.

"If we just banned it on the bridge, it would immediately shift to the South Bank," he said.

On the South Bank, the PSPO will cover the section of the riverside between St Thomas' Hospital and the edge of the borough of Lambeth at Bernie Spain Gardens. Away from the river, the area would extend to York Road and Stamford Street."

Kate Hoey MP, in a written witness statement shown to cabinet members, said: "It is terrible to see tourists and residents ripped off by these gangs.

"I have confronted the people involved in the problem myself, and found them to be very aggressive.

"I have warned innocent people on the bridge about the scam as I am so concerned about them being ripped off."

She added: "There is clearly a large amount of money being extorted from tourists.

"It is embarrassing that this issue is allowed to happen in such a high profile area as the South Bank, with the London Eye and the Houses of Parliament in such close proximity."

At first the order will be enforced by the police, although the council says it will investigate the potential for giving the private South Bank Patrol the powers to do so in future.