The leaseholder of a former council flat near the Elephant & Castle has been refused planning permission to turn the property into a holiday let. The flat is currently advertised on Airbnb at £95 a night. 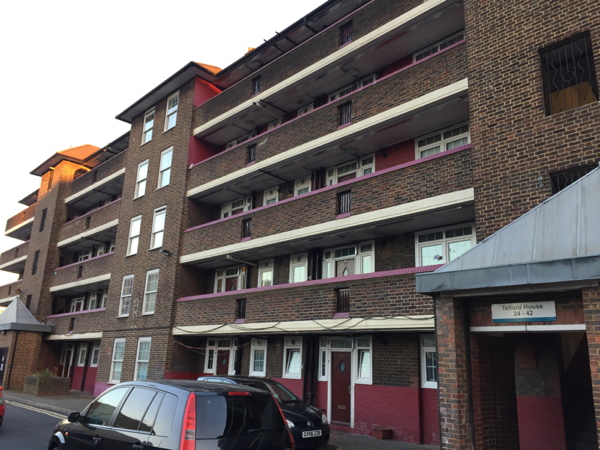 Since the start of this year, Airbnb has introduced a 90-days-a-year limit on home listings in Greater London, unless the host can prove that they have planning permission for change of use.

Ray Lewis – owner of a flat in Telford House in Tiverton Street on the Rockingham Estate – applied to Southwark Council for temporary change of use from class C3 (flat) to class C1 (short-term accommodation) for the next five years.

Council officers have now refused planning permission on the grounds that "the proposal will result in the loss of a housing unit of which there is a significant need for in the borough," in breach of policies in the Southwark Plan.

Chaucer ward Labour councillor Karl Eastham wrote to planning officers to "object to this application in the strongest possible terms".

Cllr Eastham warned: "If the application were allowed, it would signal that Southwark is open for landlords to take houses from the social rented sector and the private rented sector and convert them into holiday lets.

"This goes against stated Southwark planning policy, which is to encourage a mix of housing which is affordable to all, as it reduces the housing stock available for people on all incomes."

He added: "I have no objection to Airbnb, but the permanent change of use of a flat which should be used as a home for residents on lower and middle incomes to a holiday let is not in line with a policy which promotes affordable housing and increases in council housing."

Last month Southwark cabinet member Barrie Hargrove said he was "astonished" by the Telford House planning application and indicated that council lawyers were investigating whether action could be taken against leaseholders in council blocks for breaching the terms of their lease if they marketed their homes on Airbnb or similar services.

Elsewhere in SE1, Lambeth planners are currently considering a planning application (17/00584/FUL) for change of use of a flat in Westminster Bridge Road for use as a short-term let.