Southwark Cathedral reopened for worshippers and visitors on Sunday after an enforced seven-day shutdown in the wake of the London Bridge terrorist attack. 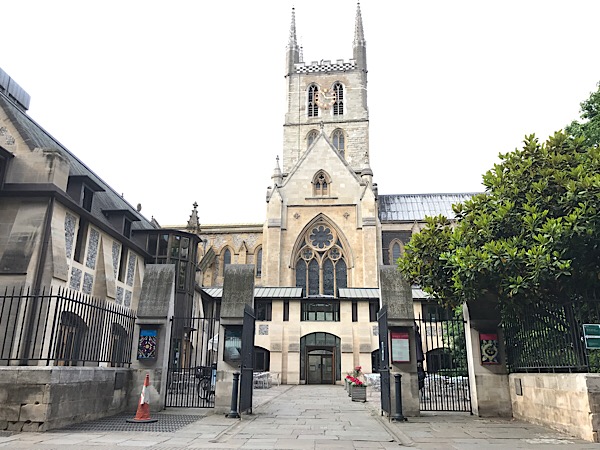 Bankside is filled with the sound of @Swarkbells #londonbridge pic.twitter.com/bnZyMUCxTD

Police forced their way into the cathedral on Saturday night as they swept the whole Borough Market area searching for suspects.

Last Sunday the cathedral congregation was unable to gather to celebrate Pentecost.

The cathedral remained behind the police cordon between Sunday night and Wednesday night, and then it took a further three days for cathedral staff to repair the damage and prepare to welcome visitors once more.

During the past week cathedral clergy have met at Guy's Chapel and St Hugh's for daily prayer.

By Sunday morning the cathedral was ready to reopen. The eight people who lost their lives during the terror attack were included in prayers at both of the main morning services.

Prayers were also said for Borough Market, its traders and for local residents who have been affected by what happened.

The Dean of Southwark, the Very Revd Andrew Nunn, presided at the 9am Eucharist which was attended by representatives of Southwark Council and the trustees of Borough Market.

In his sermon the Dean described his experience of the "living nightmare" of last Saturday night: "It's the kind of experience that only happens to other people, not to you, not on your own doorstep.

"But it happened to us, it happened on our own doorstep, literally; it happened in our own community that we love and that we've served in Christ's name for over 1400 years."

At the 11am Choral Eucharist the president was the Bishop of Southwark, the Rt Revd Christopher Chessun. He said: "Just over a week ago, this cathedral and this community witnessed terrible things which should not have happened.

"A young nurse gave her life by the entrance to Montague Chambers trying to save a fellow human being under attack.

"Others suffered terribly and many more would have been killed and injured had it not been for the rapid and effective response from the police and their engagement with people on the streets in recent days has been magnificent."

"Hatred that leads to violence is a wicked distortion of the image of God in which every human being is made.

"It is a wicked distortion of religious belief and identity."

The Bishop added: "The terror we have seen on our streets has been followed in recent days by many small acts of loving care for neighbour and many expressions of community solidarity.

"Londoners are determined to show that what has happened, terrible as it is, will not undermine the trust, friendships and goodwill which bind us together and we celebrate our remarkable diversity, especially across different faiths as a rich blessing."

Amir Eden, chair of the Bankside Residents' Forum, was applauded by the congregation at the end of the Choral Eucharist when he spoke to thank the cathedral clergy and community for its support over the past week.

Newly re-elected Bermondsey & Old Southwark MP Neil Coyle and his family joined the cathedral congregation for the 11am service.

• Books of condolence are now available for visitors to sign at Southwark Cathedral.

• A community assistance centre has been set up in Montague Chambers – next to Southwark Cathedral – by Victim Support, Cruse Bereavement Care and the British Red Cross. Anyone who wants to talk about their experience of the London Bridge attack and its aftermath is invited to visit.