Part of the wall of the former Bricklayers Arms railway goods depot is to be demolished in response to fears that it is unsafe. 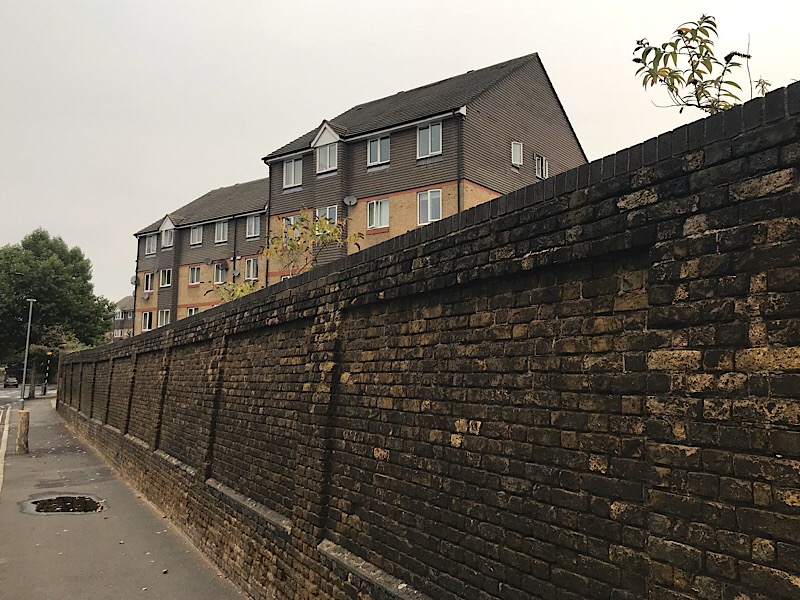 Notting Hill Housing has applied to Southwark Council for permission to replace part of the brick wall on the northern side of Rolls Road with a wooden fence and concrete posts.

The wall formed part of the massive Bricklayers Arms Goods Depot which stretched for more than a mile and a half from Page's Walk in the west to Rotherhithe New Road in the east.

The depot finally closed in the early 1980s and parts of the boundary wall were incorporated into subsequent housing developments on the site.

The wall is visible in this 1963 photograph held by the London Metropolitan Archives and in this 1988 TV report from Thames News.

Now Notting Hill Housing – which runs the St James Place estate under its Folio London brand – intends to demolish the section of wall on the north side of Rolls Road between Abercorn Way and St James's Road.

Last year Southwark Council registered the wall – which is opposite Phoenix Primary School – as a 'potentially dangerous structure' and served Notting Hill Housing with a 'notification of defect'.

Notting Hill then commissioned the Frankham Consultancy Group to carry out a structural survey of the wall.

The surveyor's report concluded that "the current structural integrity of the wall is very poor with many parts of the wall being deemed unstable and posing potential danger to the public".

Frankham's report recommended that wall be demolished and the whole length be excavated to allow new foundations to be built.