The London Fire Brigade this week held a memorial event to mark the centenary of a fire in Lambeth that resulted in the death of seven firefighters. The tragedy remains the greatest single loss of London firefighters during peacetime. 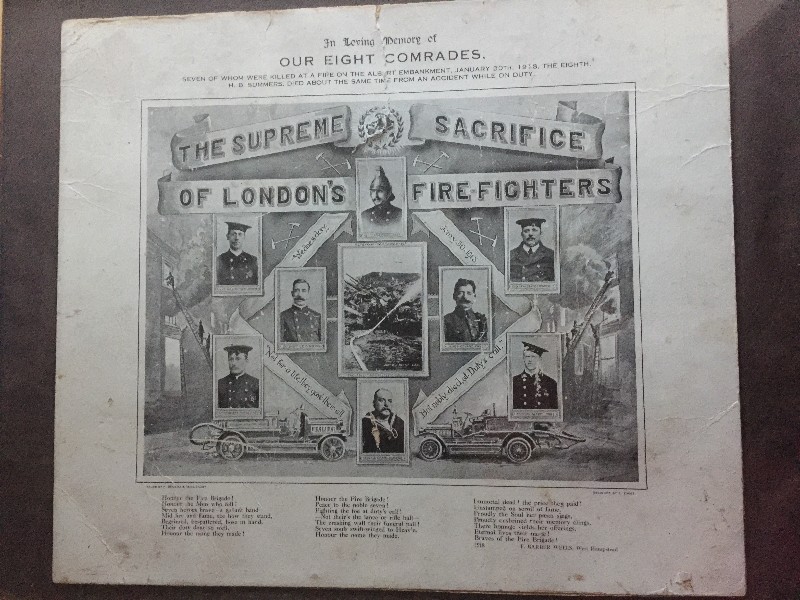 The fire, which broke out in the early hours of the morning at Branton's cattle food warehouse on Albert Embankment, is remembered as one of the darkest incidents in the history of the London Fire Brigade.

Whilst not a particularly big blaze, conditions were difficult due to dense fog and heavy smoke. The poor conditions forced the men to wear helmets, which reduced their visibility and meant they couldn't see as an outer wall collapsed on top of them.

Two sub-officers and five firemen lost their lives, with several others being injured.

The warehouse stood on the site now occupied by Lambeth Fire Station and the complex of buildings that served as the headquarters of the London Fire Brigade between 1937 and 2008.

Two of the great-grandchildren of two of the men that died were present at Tuesday's event.

"I feel humbled to be able attend this ceremony and pay my respects to the seven men who lost their lives whilst selflessly battling to put out this fire one hundred years ago," said Tom George, director of operations for the London Fire Brigade.

"They represent a long line of brave and remarkable firefighters who to this day continue to put themselves in the line of danger to protect others.

"This tragic fire will always be remembered by the brigade as one of the most devastating due to the number of firefighters who lost their lives.

"We are fortunate that the technology and equipment used by firefighters today means that firefighters are safer than ever before and for that I will always be grateful."

Kathryn Talboys is the great-granddaughter of one of the men, Sub Officer William Cornford, who lost his life at the fire aged 43.

Ms Talboys said: "I was brought up with the tragedy of the loss of my great-grandfather, which was particularly poignant with my grandmother being barely four weeks old when he died.

"Though his death is now 100 years ago it still resonates through the family, with thoughts of what might have been and the profound difference it made to us all.

"I feel honoured to attend the event on behalf of my family, particularly those who are no longer with us, to remember his bravery right to the end. We will also remember the other firefighters who died that day and are grateful to today's firefighters who daily risk their lives for all of us."

One of the fire engines that attended the Branton's fire survives in the ownership of the Royal College of Science Union.

The story of the Branton's fire is featured in the displays at the pop-up fire brigade museum currently open at The Workshop in Lambeth High Street whilst plans for the long-term redevelopment of the site are finalised.

Last week the London Fire & Emergency Planning Authority was told that the deadline for developers U+I to submit a planning application has been extended till September.