The first section of Quietway 14 - a new cycle route that will one day run from Southwark to Thamesmead - was this week officially opened by London walking and cycling commissioner Dr Will Norman and Southwark's Cllr Richard Livingstone. 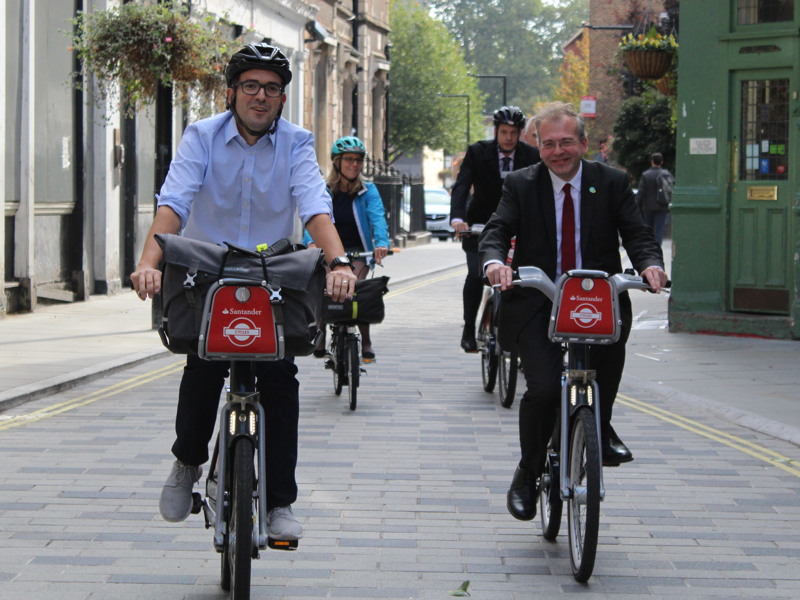 Dr Will Norman and Cllr Richard Livingstone in Newcomen Street

As part of the scheme, the section of Union Street immediately west of Southwark Bridge Road has been closed to general traffic, as has the western end of Newcomen Street. The project has also led to changes to the one-way system for motorists on streets east and west of Bermondsey Street.

"A Quietway is part of our growing network of cycle routes that go across the city," explained Dr Norman.

"There are different ways of protecting cyclists, making them feel safe and enabling them to have the confidence to move around the city.

"​Along the main roads it's really important that we provide segregated protection – so the sort of infrastructure that you see along Embankment and along Blackfriars Road – but not everybody wants to cycle along the big busy noisy road even if they are on protected infrastructure.

"So what we also have is a complementary network of quieter​ routes – the Quietways – which follow some of the residential roads and quieter backstreets.

"And what we're doing there to protect cyclists is reduce the volume of traffic."

Quietway 14 is just a few streets north of Quietway 1 (Waterloo to Greenwich) which was built under Boris Johnson's Mayoralty and opened by Sadiq Khan in 2016. Dr Norman describes Quietway 1 as "hugely successful" with a significant increase in rider numbers.

"When you look at some of the monitoring we've done on Quietway 1 what's really exciting is that we are widening the demographics of cycling," he said.

"We're seeing more women and a wider group of Londoners using those Quietways which I think is really exciting because we want cycling​ to appeal to a much wider group of people than are maybe thinking about cycling at the moment.

"So it's great that this infrastructure is actually enabling that."

Southwark's cabinet member for transport Cllr Richard Livingstone told us that Quietways help to create a nicer environment for both cyclists and pedestrians.

"It's helping give back streets that have been dominated by cars to other users," he said.