Tibet Festival in the Park 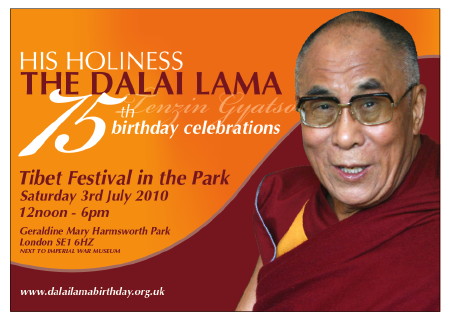 Geraldine Mary Harmsworth Park - which includes the Tibetan Peace Garden that was opened by the Dalai Lama in 1999 - will be buzzing with musicians, entertainers and performers from Tibet and around the world along with an array of Tibetan and other stalls, Tibetan food and more.

Attractions and activities include:
• Dramatic traditional sacred Buddhist dances by the Tashi Lhunpo monks of Tibet
• Traditional and modern songs by world renowned Tibetan singer Soname
• Mongolian overtone chanting by Michael Ormiston and Candida Valentino
• Colourful Tibetan dances and music from the Tibetan Community in Britain dance group
• Parade of Tibetan costumes
• Tibetan tea in a traditional Tibetan nomadic tent
• The history of Tibetan medicine and traditional herbs exhibition
• Opportunity to write personal birthday messages to the Dalai Lama on a windhorse (paper prayer flag)
• A variety of workshops to discover some of the colourful and distinct traditions of Tibet including the art of the sand mandala, overtone singing, butter sculptures, traditional Tibetan songs
• Children's activities include face painting and making prayer flags and yak puppets
• Plus other very special guest acts