Plans for a new 31-storey office-led development on the Elizabeth House site in York Road - next to Waterloo Station - have won the backing of Lambeth councillors. 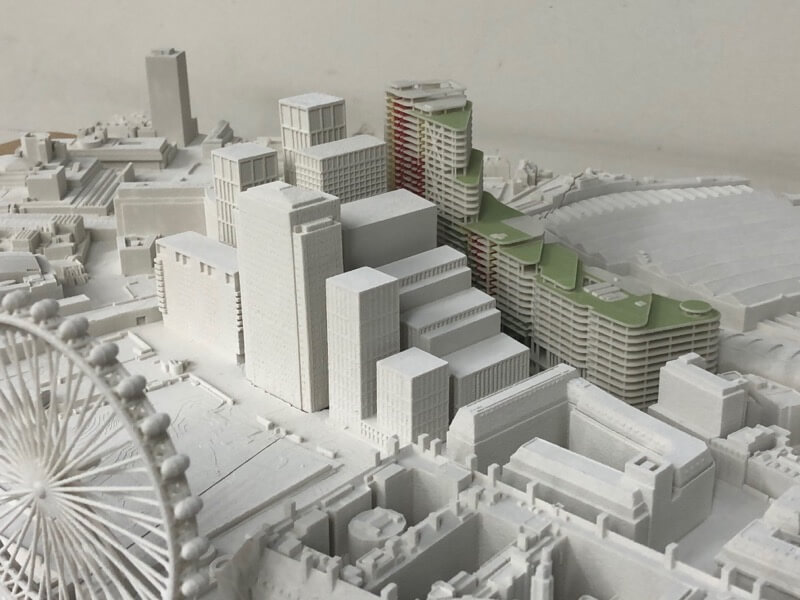 Members of Lambeth Council's planning applications committee unanimously resolved to grant permission for the scheme at their meeting on Tuesday night.

The site has a lengthy planning history: the most recent in a string of unbuilt proposals was a David Chipperfield-designed scheme which was approved by the then communities secretary Eric Pickles in 2015 after a string of legal challenges.

The latest scheme has been designed by Allford Hall Monaghan Morris and ranges from 12 storeys at the Leake Street end to 31 storeys at the northern end next to Victory Arch.

As many as 11,000 jobs will be accommodated in the new offices and shops to be created as part of the proposal.

The scheme includes a second floor level tree-lined 'promenade' linked to the Waterloo Station concourse, as well as new routes between York Road and the shopping centre being created underneath the former Waterloo International Terminal.

Planning officer Jeff Holt told councillors that the scheme was "a high quality design that is a logical response to the site's constraints and opportunities".

Lambeth's assistant director for planning, Rob Bristow, said that the scheme would "anchor the transformation of Waterloo" with "lasting benefits to the local community".

HB Reavis will contribute around £100 million in community infrastructure levy (CIL) and section 106 payments linked to the development.

A new lift shaft – giving step-free access to the Northern line at Waterloo – will be provided as part of the scheme, with the developer meeting £1.8 million of the £4.5 million site.

Local resident Jenny Stiles addressed the committee to object to the loss of the footbridge across York Road, warning that the issue had been lost in the wider consideration of the rest of the scheme.

The current footbridge – only reopened this summer after the Shell Centre redevelopment – enables pedestrians to reach the South Bank and St Thomas' Hospital from Waterloo Station without crossing York Road at ground level.

Nearly 700 people have signed an online petition, with more signatures gathered on paper.

Kiran Pawar from HB Reavis told councillors: "The redevelopment of this site has been a long-running sore for more than two decades with multiple proposals, none of which have been delivered."

Describing the current building as "an impermeable eyesore at the end of its economic life," he told the committee that "we stand ready to deliver these proposals should they be approved".

Architect Simon Allford said: "Put simply, this project is about replacing a tired, inefficient and unhealthy building with one that is fit for the 21st century."

Nic Durston, chief executive of South Bank Employers' Group and South Bank BID, addressed the committee in support of the application. He described Waterloo as "the borough's economic and growth engine".

Work is due to start in 2020. Demolition of the existing Elizabeth House and construction of the new buildings will take six to seven years. Several tube tunnels pass under the site, making construction trickier than it would otherwise be.