Protesters against a new tunnel under the River Thames in east London staged a 'die-in' demonstration at City Hall on Friday. 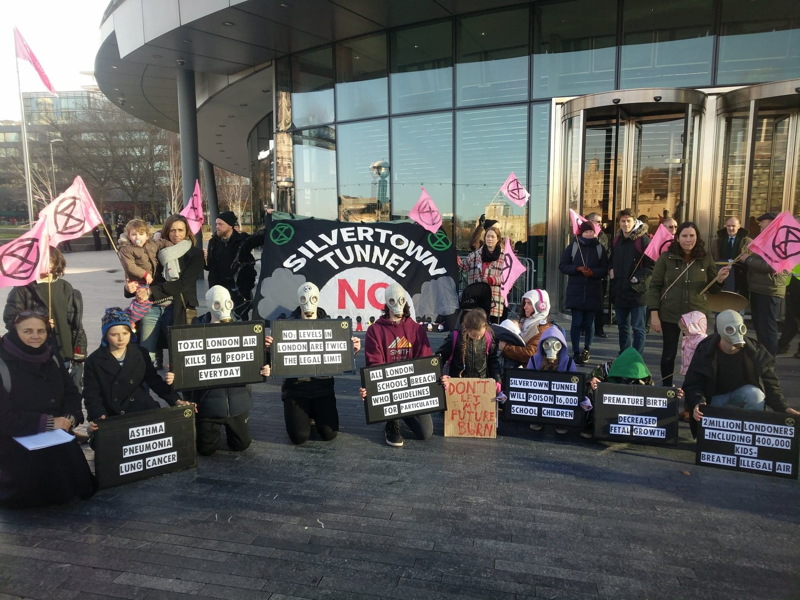 Extinction Rebellion activists and people living near the planned planned Silvertown Tunnel called on the Mayor to cancel it.

Demonstrators lay on the ground and children wore gas masks to show the potentially fatal impact of air pollution.

The new river crossing will link Greenwich and Newham near the existing Blackwall Tunnel.

The project was signed off by Transport for London (TfL) on Monday, and construction is due to start next year.

The Mayor says the tunnel will relieve congestion and improve air quality north and south of the river.

But Hackney, Newham, Greenwich, Southwark and Lewisham councils – all Labour controlled – have questioned his plans.

They say TfL's own projections show air pollution will get worse and breach legal limits in some places.

Demonstrators read out a letter sent to the Mayor in August.

The letter has been signed by climate scientists and academics from universities across the UK, clean air activists, and Labour, Green and Liberal Democrat politicians.

It says the tunnel would "threaten much of the good work on improving air quality" that the Mayor has done.

Mr Khan replied to the letter earlier this month, but has never met protestors to hear their concerns.

Baroness Jenny Jones, a Green Party member of the House of Lords and Deputy Mayor of London under Ken Livingstone, joined protesters at City Hall today.

She said Sadiq Khan's decision on Silvertown will "blight" his environmental legacy, and branded his decision not to meet demonstrators a "failure".

She said: "When there's so much opposition and when boroughs as well come out against the tunnel, it's absolutely ridiculous.

"It's a terrible waste of money and it's going to make the climate crisis worse."

"This is terrible. It will blight his legacy. We will not remember him as any sort of green climate friendly mayor."

Victoria Rance, Stop the Silvertown Tunnel Coalition organiser and Green Party parliamentary candidate for Greenwich and Woolwich, said the protest was a "symbolic gesture" that the Mayor must listen.

She said: "Today it was so heartening to have all these children here because it really matters to them.

"I saw them walking towards the City Hall with their banners and feeling excited because they could do something.

She said the demonstrators wanted "to keep Sadiq listening and stop things going ahead with business as usual" but admitted it would be "a miracle" if the Mayor changed his position.

She added: "The hypocrisy of it is staggering. I see him tweeting about clean air and what he's doing, and he has these conferences and everyone invites him to speak about the ULEZ and then he's doing this. It's staggering and people are so angry about it."

On Monday, a spokesperson for the Mayor said Mr Khan welcomed the sign off on the tunnel, "which will enable us to progress our essential plans for more river crossings in East London".

He said: "A new tunnel at Silvertown – combined with the introduction of tolls on both the Blackwall tunnel and at Silvertown – will play a crucial role in tackling congestion, improving air quality and providing much-needed additional bus services across the river."

A TfL spokesperson said: "The Silvertown Tunnel has been designed to reduce congestion around the Blackwall Tunnel, as well as enable new cross-river bus routes to be introduced.

"The traffic modelling demonstrates that overall traffic does not increase as a result of the Silvertown Tunnel scheme."