Hundreds of people laid down in Blackfriars Road during Friday evening's rush hour to urge Transport for London to improve road safety for cyclists in the capital. 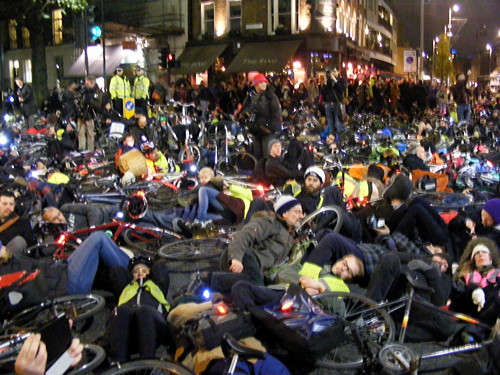 The 'die-in' was organised in response to the recent deaths of six cyclists on London's roads during a two-week period.

The event began with a half-hour silent vigil after which participants were asked to lie down in the road with their bicycles.

During the rally which followed the 'die-in' a list of cyclists and pedestrians killed in traffic collisions on London roads in recent years was read out.

The roll-call – compiled by the RoadPeace charity – included victims of several SE1 collisions:

At the end of the protest, organiser Donnachadh McCarthy met Transport for London's surface transport managing director Leon Daniels to hand over a list of demands, including a request for board-level representation for pedestrians and cyclists at TfL.

Andrew Gilligan, the Mayor of London's cycling commissioner, has responded to the 'die-in' on his City Hall blog.

• Local Lib Dems are holding a Southwark Cycling Summit next month to which all local cyclists are invited.