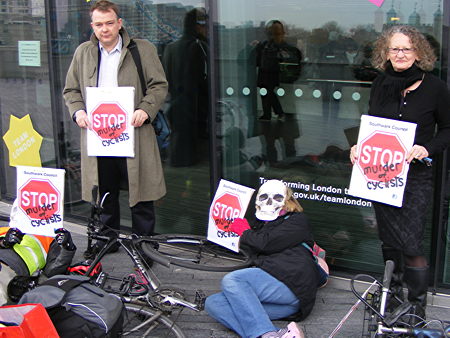 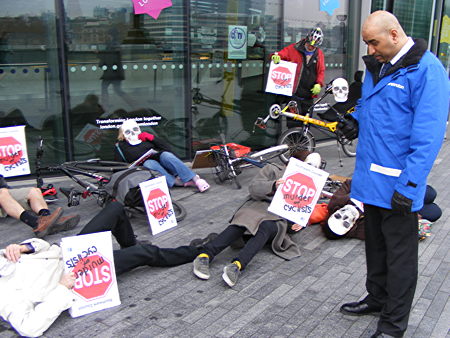 The 'die-in' – under the slogan 'Stop murder of cyclists in Southwark' – was organised by former councillor Donnachadh McCarthy who staged a similar stunt at a recent Southwark Council meeting at Walworth Academy.

Mr McCarthy's campaign is pressing the Mayor of London to insist that one third of the transport budget devolved to Southwark by City Hall be allocated to cycling infrastructure. His campaign is also seeking "Dutch-style traffic-free cycle paths" on all of the Southwark roads managed by Transport for London within five years and a redesign of the nine most dangerous junctions that the Mayor is responsible for in Southwark, including physical protection for cyclists.

"The quantity of needless cyclist deaths and injuries on London's streets is tragic and infuriating," said Jenny Jones AM.

"London needs a Mayor that can deliver on safety for all road users, and Transport for London must urgently address the need to make junctions safer for cyclists."

Southwark Cyclists, the local branch of the London Cycling Campaign, has chosen a less confrontational approach than Mr McCarthy and is working directly with Southwark Council.

"We knuckled down and came up with what I believe to be some really practical solutions to problems faced by cyclists in our borough every day," said Cllr Barrie Hargrove, Southwark's Labour cabinet member for transport, environment and recycling, after the first joint meeting between campaigners, councillors and transport planners.

"I really look forward to working with the team to make Southwark one of the safest boroughs for cyclists in the next three years."

Southwark Cyclists' coordinator Alex Crawford added: "At the next meeting, in a month, we look forward to focusing on safety and some medium term goals, tackling the reasons people are currently too scared to cycle; planning a network of 'green links' and start to work out how to tie-in cycling infrastructure with planned regeneration projects. We will also start to consider our longer term aspirations specifically for main roads."

The group has recently published its guiding principles and objectives for cycling in Southwark, including the clear statement that "the northern roundabout at the Elephant & Castle has no place in a civilised society".

The council has also pledged its support for the 'Cities fit for cycling' campaign run by The Times.

Shadow cabinet member for environment Cllr Geoffrey Thornton said: The facts are clear: while Southwark has the second highest cycling potential of any borough in London, just 3 per cent of journeys are currently made by bike.

"The Liberal Democrats' cycling summit provided a wonderful opportunity to examine the barriers that prevent more people from cycling in our borough and to look at what the council could do to increase take-up.

"It's clear that local authorities can play a huge part in promoting cycling through investing in education, training and infrastructure.

"I look forward to working with all parties to promote this cheap, efficient, healthy and environmentally-friendly form of transport, and hope to present our ideas in the near future."