New analysis of air quality measurements during lockdown shows that pollution dropped by a third at the top end of Borough High Street. 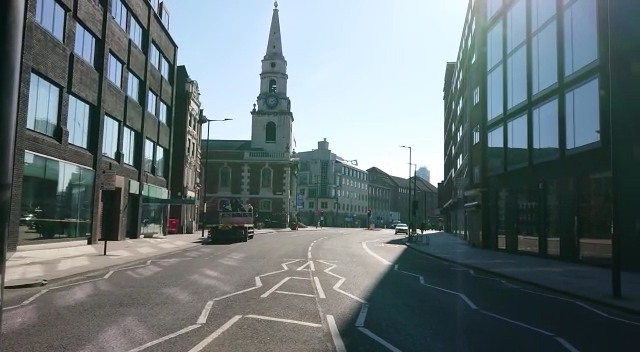 A near deserted Borough High Street on 24 March

As part of the Build Back Cleaner Air project, new research has been published by Global Action Plan, Guy's and St Thomas' Charity and Environmental Defense Fund Europe (EDFE), including air pollution data and public feedback in Lambeth and Southwark over the lockdown period.

This includes analysing the nitrogen dioxide (NO2) levels at Breathe London monitors and a survey of 522 residents.

One of the most dramatic reductions in pollution concentrations was at the busy Borough High Street location located near Southwark Cathedral at the foot of London Bridge.

Researchers compared data from December to February with stats recorded during the first four weeks of lockdown from mid-March onwards. They acknowledge that the current restrictions on cars and lorries using London Bridge will also have affected the pollution readings here – but the Mayor is now proposing to make the restrictions permanent.

"By looking closer at which activities are producing the pollution, we can drive targeted solutions to clean the air," said Elizabeth Fonseca, senior air quality manager at EDFE.

"At Borough High Street, Breathe London modelled data shows that nearly half of nitrogen oxides pollution comes from commercial activity, like heating, cooling and powering shops and offices, as well as delivery vehicles driving to and through the area.

"If businesses step up and reduce their own pollution emissions, it could go a long way toward creating a healthier London."

A recent public survey by Global Action Plan commissioned by Guy's and St Thomas' Charity found that 73 per cent of residents in Lambeth and 77 per cent in Southwark said air quality was better during lockdown, with a similar proportion of residents backing tougher measures to cut traffic and pollution.

"It's great to see further confirmation that the people of Southwark are right behind us in making cleaner, quieter and safer streets a priority," said Cllr Richard Livingstone, Southwark Council's cabinet member for environment, Transport and the climate emergency.

"Almost 4,000 people have already shared their ideas about how we can improve our streets and we are busy working to make many of these suggestions a reality.

"We'll continue to work closely with residents, neighbouring boroughs and key partners, as only together can we bring about lasting change, to improve the environment and the health of everybody here in Southwark, especially the most health vulnerable and our children."

Kate Langford from Guy's and St Thomas' Charity added: "We know that air pollution disproportionately impacts some people's health more than others, including children and people with long-term conditions.

"There is also emerging evidence that COVID-19 leads to long-term lung damage and the groups disproportionality impacted by the virus are likely to be affected by air pollution as their lungs recover.

"This research makes clear that Londoners want the cleaner air and safer streets they have experienced in the last few months to remain, and that all parts of society including employers and businesses have a part to play in making the cities we live in healthier."