Southwark is to be run by a joint administration of Liberal Democrats and Conservatives for the next four years. The deal was struck after 10 days of electoral stalemate. 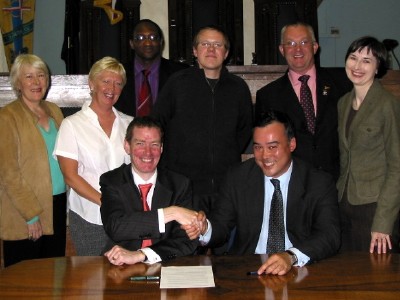 The local elections on 4 May produced a hung council with 28 Lib Dem councillors, 28 Labour members, 6 Conservatives and one Green Party representative.

With the two largest parties having the same number of councillors, the Conservatives – with councillors in just two of the borough's 21 wards – have found themselves holding the keys to power.

A deal was finally concluded on Monday night, and on Tuesday Lib Dem leader Cllr Nick Stanton (Riverside ward) and Conservative leader Cllr Kim Humphreys (College ward) met at the Town Hall in Peckham to sign an agreement to form a joint administration.

The agreement gives the Tories two seats on the 10-strong Council Executive, including the post of deputy leader.

The preamble to the document says that neither of the largest parties "has a mandate to govern on their own for the next four years".

It continues: "We recognise that a strong and stable political leadership is essential if the Council is to continue to improve and to meet the challenges of the next 4 years. Lurching vote by vote in the council chamber will not deliver the positive changes that people want in their community.

"We are two distinct political parties and will remain so, but we have compared our manifestos and believe that we can combine around a common agenda which will bring continued improvements.

"We have therefore agreed to form a joint administration for the next 4 years, and are determined to deliver on the following objectives for the Borough's diverse community:

• Keep council tax rises at or below the rate of inflation over the lifetime of the joint administration
• Get more powers for wardens to crack down on crime
• Double the vastly improved rate of recycling
• Open 3 new secondary schools and improve primary school provision in the borough
• Replace or upgrade our leisure centres
• Build 3,000 affordable homes for local people to rent or buy

"Our first tasks are to ensure that the regeneration of the Elephant and Castle continues to the benefit of all, that we achieve a step change in performance in our housing service and that the council appoints a new chief executive to take over from Bob Coomber."

Writing on his new blog, Southwark Labour leader Cllr Peter John says that the joint administration is reminiscent of the "disastrous" Lambeth coalition between 2002 and 2006. He adds that "...it really does look as if the Lib Dems have given up real power in Southwark for the sake of holding office. I have no doubt that the people who will suffer as a result of this arrangement over the next four years are those who continue to rely so heavily on council services, and who turned to Labour at this election."

The next important events in the council diary are the mayor-making ceremony on Wednesday 24 May and the full council constitutional assembly on Wednesday 31 May.