Southwark's Labour leader Peter John tells us he's still "fizzing with ideas" after eight years running the borough, and that his manifesto is all about "old-fashioned municipal socialism". 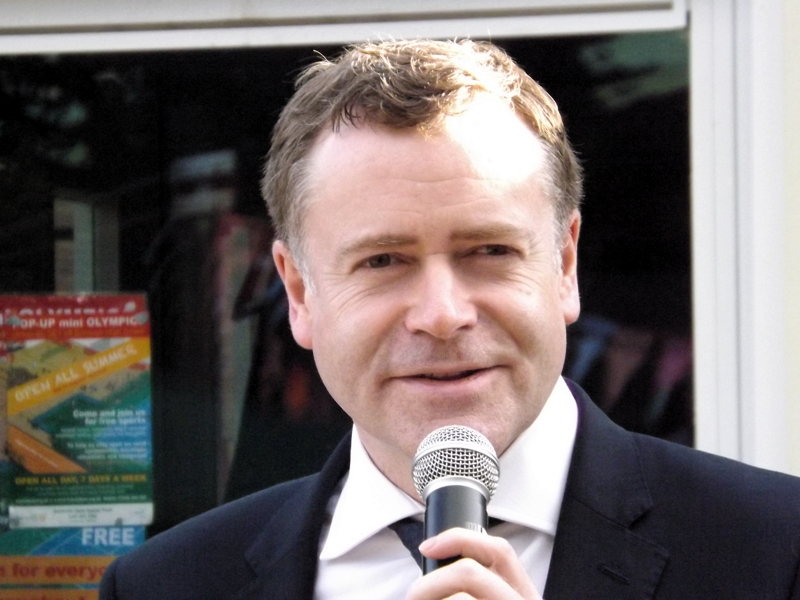 After the 2014 local elections there were two facts that Southwark Labour councillors were fond of repeating. The first was that you could now walk the full length of the borough from its southern tip in Dulwich to the Thames at Rotherhithe without leaving Labour-held wards.

The second was that there were more Southwark Labour councillors with the surname Williams (3) than Conservative members of the council (2).

All the signs are that Labour will increase its current tally of 48 councillors after Thursday's elections, and that Peter John will become the longest-serving Southwark Council leader since the early 1980s, eclipsing Lib Dem Nick Stanton's two-term record (2002-2010).

What does Cllr John see as the biggest achievement of his administration since 2014?

He points immediately to the council's free swim and gym scheme, which has chalked up 75,000 registrations, and is proud that uptake amongst women and black and minority ethnic residents has been particularly strong.

"That shows that the policy is working the way we wanted it to.

He also cites the continuing work to upgrade existing council housing in the borough, with more homes reaching the 'decent homes' standard.

Whilst Labour puts the figure of new council homes completed at 535, Southwark Lib Dems cite 200 whilst a document approved by the council's cabinet last month said that 380 of the 1500 were complete.

Cllr John says he is both proud of what's been achieved so far, and frustrated that it's taken longer than he had hoped: "The quality of all them is amazing, and is setting us up really well to go forward."

Winning over existing residents when building on small bits of land between existing homes can be tough: "In our crowded borough, even though people see the need for more council housing, they will challenge you as to whether it has to be that many and that location."

The regeneration of the Old Kent Road – where 20,000 new homes are planned – is likely to be a major theme for the next four year political cycle in Southwark. How will the council learn from the difficulties of other major projects to build public support for such wholesale change?

The council leader admits that the authority's recent buzzphrase "social regeneration" can be hard to define, but he says it's about making sure residents see "the soft benefits of the hard regeneration" such as access to jobs and improved public health, living "longer and healthier lives".

"There's clearly a lot more work to do and we have to be alive to the fact that some businesses on the Old Kent Road ... want reassurance from us.

"The scale of change is massive ... and I absolutely understand why people have concerns about that.

"We have to have this scale of ambition – a) if we are going to solve London's housing crisis and b) if we are to bring the infrastructure changes that we need to that part of the world – ie the Bakerloo line extension."

Earlier this year the council leader took the unusual step of publicly endorsing the controversial Delancey planning application for the Elephant & Castle Shopping Centre and London College of Communication sites, speaking vigorously in support of the proposal to a largely sceptical crowd at a meeting of Borough, Bankside & Walworth Community Council.

Under the proposals that went to planning committee in January, only 33 of the 979 new homes were to be offered at the equivalent of social rent – prompting a number of Labour backbenchers and candidates to speak out demanding a better deal.

"I thought on balance – and it was always an 'on balance' view – that the offer was good enough," Cllr John says, noting that increasing the social rented homes in the scheme would come at the cost of fewer London Living Rent homes.

"There's a very important place for London Living Rent housing for people who would never quality for social housing in our borough," he adds.

Cllr John insists that the council's commitment to a redeveloped Elephant & Castle serving as "the Latin American hub of London" is undiminished, even though he concedes that this may not always have been made clear.

"We need a Latin American champion," he says, adding that he hopes to appoint one of his newly elected Labour councillors to the role in the coming weeks.

On the future of the bingo hall, he says he has had constructive meetings.

"I'm absolutely alive to the fact that you have hundreds of people going through there each day for whom the bingo is providing an incredibly important support service and a means of keeping in touch with friends and neighbours."

With the signs pointing to Labour having somewhere between its current 48 seats and all 63 seats on the council after Thursday, how would Cllr John help Southwark avoid some of the negative consequences of a one-party state that have been evident in other London boroughs?

"I think as a Labour group internally we will have to manage ourselves differently," he says, noting the challenge of letting everyone's voice be heard in meetings of such a large number of councillors.

He says the Labour Group's public split over the Elephant & Castle Shopping Centre scheme showed that "the internal systems weren't working within the group".

Cllr John suggests that having taken money out of the 'democracy' budget in recent years – cutting community councils and reducing the number of council assembly and cabinet meetings – Labour will be looking to put more funding into this area.

The council leader says he recognises the high degree of public cynicism about the planning process in Southwark.

Whilst the council has made some moves towards transparency, leading the way in the publishing of developer's viability assessments, he suggests that too many people feel that they haven't had their say on major schemes.

He points to the special community council meeting held to discuss the Elephant & Castle Shopping Centre, and suggests that similar open forums could be held in advance of major planning decisions, with community councils empowered to produce reports which developers and planners would have to respond to.

After eight years in the top job – a period which has seen many of his opposite numbers in other central London boroughs come and go – Cllr John insists that he's "still fizzing with ideas".

"I still think I have something to offer in terms of leading the group forward," he adds.

"I don't think leaders should be around forever – you do have a shelf-life – but my best before date has not yet been reached, I suppose I would say."

Just as Neil Coyle's increased majority in 2017 came on the back of the popularity of Jeremy Corbyn, some see a disconnect between Labour's national position – and success in the opinion polls – and the more centrist approach of Peter John.

As former Southwark Labour councillor Piers Corbyn remarked at hustings last week, there are many in the borough who will "vote Jeremy Corbyn but get Peter John".

Southwark's leader insists that his party's programme for the borough is rooted in "old-fashioned municipal socialism" and that people on the left should unite under the "rallying cry" of universal entitlements to public services such as free healthy school meals and free swim and gym – as well as "an intolerance of poor council housing".