A row has broken out over the felling of four trees in Archbishop's Park - whilst others have been daubed with white paint in what is thought to be action by environmental campaigners. 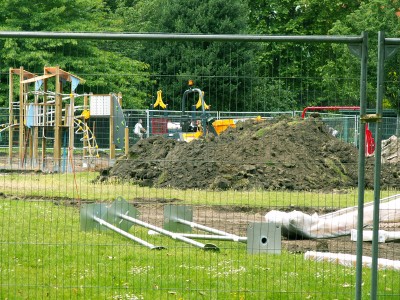 Work is under way on the new play area

Four Leyland Cypress trees were removed this week as part of a project to remodel and enlarge the play area in the park, which is SE1's largest green space.

Lambeth Council points out that it carried out "wide public consultation" in the developing the design for the new playground. But one concerned local parent said that they were "appalled that this could happen" and insisted that the designs circulated for consultation show the trees still in situ.

A council spokeswoman told us: "There was consistent public support for enlarging the play area. In order to do this it was necessary to partially remove a boundary between two areas."

The felling of the trees was temporarily halted on Thursday morning when two local residents intervened. The contractors said that they'd stop work and speak to their boss, but two more trees were later removed. 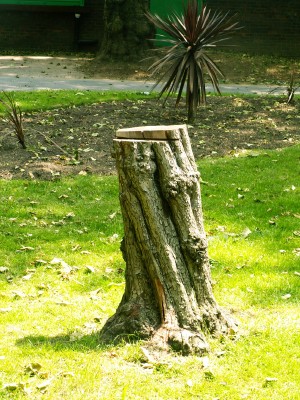 The stump of another recently removed tree

"The trees removed were the remains of a poor condition Leyland Cypress hedge and contributed little to the quality of the park's landscape," added the spokeswoman, drawing a contrast between the removed trees and the "valuable" London Plane trees elsewhere in the park.

Referrring to the plane trees on the northern edge of the park threatened by the Founder's Place development, the spokeswoman said: "The council has consistently fought to preserve those plane trees in recognition of their heritage and value to the park."

Another local resident questions the legality of the removal of the trees, given that the park is in a conservation area and the land is owned by the Church Commissioners rather than Lambeth Council.

Lambeth Council says that new trees will be planted in the playground area this autumn. 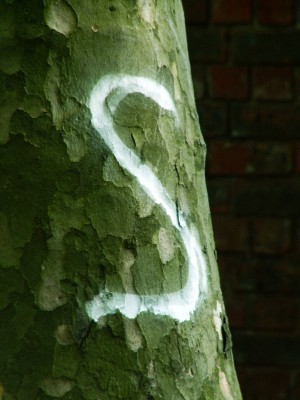 One of the marked trees in the park

A number of trees in the park have had the letter S sprayed on them – apparently a device used by environmental protesters in rainforests, where a silicone nail is inserted which would break a chainsaw, but which cannot be easily detected, thus preventing the trees from being cut down.

However, the council says that this vigilante action could in fact make the trees more likely to be felled: "In this case our primary concern is for the safety of staff carrying out tree work. Sadly, nail damage to remaining trees could lead to their premature removal."

Last November there were angry scenes in the park when local residents and Kate Hoey MP staged a protest against the removal of The Rose garden.

The council spokeswoman added: "We appreciate the strength of feeling that local residents have for their park and are confident that the new play equipment will make a long term improvement to the park and will help many more people enjoy the park."

The removal of these four trees is likely to be discussed at the AGM of the Friends of Archbishop's Park to be held on Tuesday 13 June at the ADI Centre in Lambeth Road.