&quot;Among the Churches of the world we are an inclusive church that welcomes diversity and theological debate&quot; declared the Canadian primate at Southwark Cathedral. 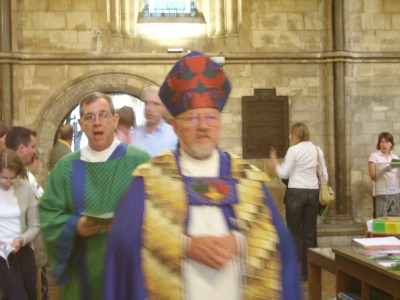 Archbishop Andrew Hutchison, preaching during Sunday's Choral Eucharist, was commenting on the current controversy over America's gay bishop and this month's election of the first woman primate Katharine Jefferts Schori.

The Archbishop said that his visit to Southwark had a particular significance to him personally because his ancestor Bishop Lancelot Andrewes was buried in the cathedral. This was the reason for him being christened Andrew and having the portrait the 17th-century bishop on his office wall in Toronto.

Archbishop Andrew said that the Elizabethan Settlement known to Andrewes was an example of "allowing room for Puritan and Episcopalian alike. We are the church of Richard Hooker that makes accommodation for everybody -an accommodation, as he says, not of compromise, but of inclusion."

The Canadian primate praised the Archbishop of Canterbury, who he had met earlier, for promoting theological education.

"On the one hand we have too many Anglicans who know little of what is in the Scriptures. On the other, we have too many Anglicans who regard the Bible as an operator's manual and accept the whole canon uncritically on face value. The Scriptures are not in and of themselves the sovereign word of God; that is the title reserved for one to whom the Scriptures point – the eternal and incarnate Word who is with us and revealed to us by the Holy Spirit."

The Archbishop, who was present at last week's Ohio convention, reminded the large Southwark congregation that once slavery was accepted and women not permitted to attend Church meetings but the Spirit had more to teach us.

"Do we accept the Scriptural texts as being both relevant and binding?" asked the Archbishop. "Or does the Spirit have yet more to teach us through modern science and the cries of yet another minority longing for full inclusion in the body of Christ?"
• The Archbishop of Canada will be delivering a lecture called 'Stretching The Bonds of Affection: understanding the place of Canada in the Anglican Communion' in Southwark Cathedral's Library on Tuesday 27 June at 7pm. Admission free; drinks served from 7pm.
• The Canadian Archbishop's visit is part of the cathedral's 1400 anniversary celebrations. The Archbishops of Brazil, Canterbury and Cape Town will be preaching later in the year.