This summer Archbishop's Park has more to offer children in North Lambeth, thanks to the completion of phase 1 of the new playground. 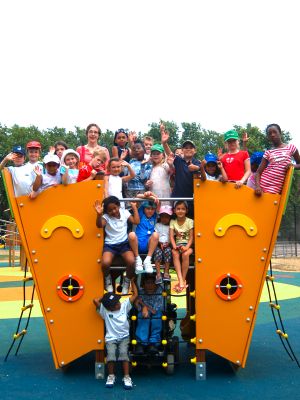 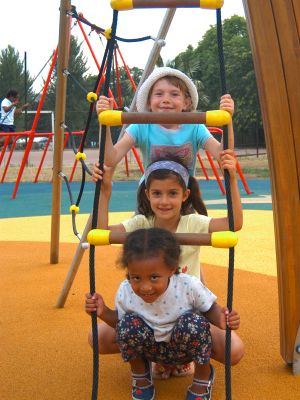 The first phase of work to improve and expand the playground in SE1's largest park was completed last month. The new play area has three main areas catering from different ages – from toddlers to older children.

The new equipment is themed around travel, fruits and ports, with new palm trees providing a tropical feel. A pirate ship is proving a big hit, along with a new activity trail.

Helen Lees is chair of the Friends of Archbishop's Park, one of the organisations that has worked to make the new play facilities possible. She says that she's delighted by the response so far, with many more families using the play area.

"I've had a lot of comments through the membership. People have been very favourable towards the playground ... and just some of what the kids have been saying ... you can see as well by the numbers of children who are actually there."

She explains that the aim of the project was to extend what was already there, and to incorporate the requirements of children with special needs.

The consultation process with park users included collaboration with Fairley House School in Lambeth Road, which is an independent day school for children with learning difficulties such as dyslexia and dyspraxia.

"The basics that people want I don't think have changed over the years," says Helen. "They want swings, they want slides, they want activity centres, they want to have equipment for different groups of children, and I think we tried to incorporate those things."

"The Fairley House schoolchildren obviously had things to think about in terms of their particular development for children with different needs so we tried to incorporate some of that in the activity trail. So I think there's something for everyone there."

Funding for phase one has come from a range of sources: "The main body that we've worked with has been WCDG," says Helen. "They were very helpful in terms of helping us prepare the bid which gained us SRB funding. That helped us then gain match funding from Lambeth Council. And we got Ł22,000 from the Western Riverside Environment Fund."

The project isn't over yet; more money is still needed for phase 2, which will bring more equipment and furniture to the play area.

"In terms of phase 2, we've approached the Guy's and St Thomas' Charity and we're putting in a bid there, and Southbank Mosaics who've got some money through the Community Chest which is administered by the Waterloo Community Development Trust."

The project with Southbank Mosaics (a social enterprise based at St John's Waterloo) will come to fruition this autumn, with the completion of a new 'tree of life' mosaic incorporating the work of children from the Coin Street Family and Children's Centre in Upper Ground and the ADI Centre in Lambeth Road.