St Joseph's Primary School in the Borough has been holding a week of celebrations to mark the 40th anniversary of the Catholic school. 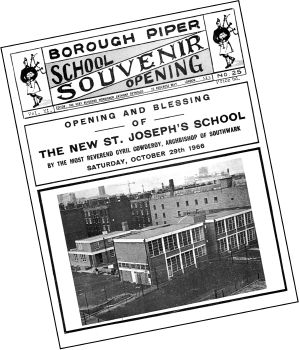 The primary school took its first pupils in the autumn term of 1966 and was officially opened and blessed by the then Archbishop of Southwark, the Most Revd Cyril Cowderoy, on 29 October 1966.

The school building cost more than Ł90,000, of which Ł20,000 was found by the Catholic parish of the Precious Blood, Borough.

This week's celebrations began on Monday with a multicultural day to reflect the diversity of the school community where more than 30 languages are spoken.

On Tuesday past pupils were invited to visit as part of a day of activities to enable St Joseph's current pupils to learn about the history of the school.

Torrential rain didn't dampen spirits at the autumn fete which was relocated inside the school buildings. Several local companies provided raffle prizes, including the Oxo Tower Restaurant and the Clink Prison Museum.

The week's events concluded on Friday with an open-air school Mass and picnic lunch.

The school is also sponsoring orphaned children in a Gambian village.