The dead of the two World Wars have been remembered at war memorials and at Southwark's two cathedrals. 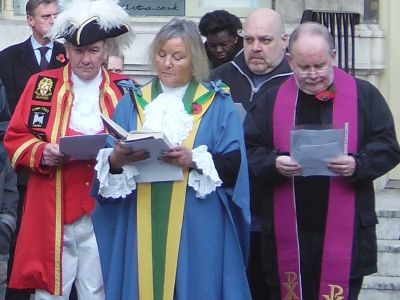 On Sunday morning more than 80 local residents gathered at the Borough War Memorial in Borough High Street for a short service and wreath laying.

At 11am London's Town Crier Peter Moore signalled the start of the two minute silence as police stopped traffic from moving between Southwark Street and Union Street. The quiet was broken only by a dozen backpackers who appeared unaware of the signifigance of the ceremony.

Already at the base of the memorial was the traditional tribute from nearby Hacking & Sons.

Prayers were led by Revd Dave Pape from St George's and Fr Bill Harrison from the Precious Blood who was attending his first Remembrance observance since his recent arrival in the parish.

The ceremony ended with local war veteran Jim Powell, who served in France, Belgium, Holland, Germany and Burma, reading the Kohima Prayer: "When you go home, tell them of us, and say: For your tomorrow, we gave our today."

Another wreath was laid on behalf of Southwark Council during a well-attended ceremony at the memorial outside St George's Roman Catholic Cathedral. The short service was led by Canon James Cronin with music provided by the cathedral's two choirs.

At Southwark's Anglican Cathedral the two minute silence fell at the beginning of the main Sunday service. Just before 11am the standard of the British Legion City Hall branch was carried in procession down the nave and a wreath was laid at London Fire Brigade's Second World War memorial in the south transept.

Remembrance Sunday events were also held on board HMS Belfast and at the Soviet War Memorial in Geraldine Mary Harmsworth Park.

On Friday a short memorial service conducted by Canon Richard Truss of St John's Waterloo was held in the City Hall chamber. The Dean of Southwark preached and wreaths were laid in memory of London County Council staff who died in the First and Second World Wars.

Around 200 members of Guy's Hospital and King's College staff attended an outdoor Remembrance service at the Hospital War Memorial on Friday.