The Queen has unveiled a memorial to Mohegan Chieftain Sachem Mahomet Weyonomon who was buried in an unmarked grave in Southwark in 1736. 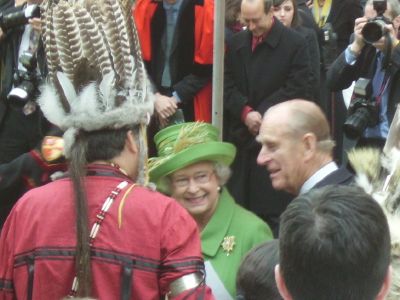 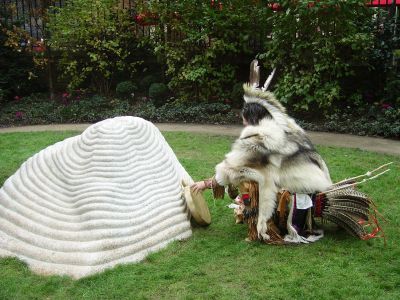 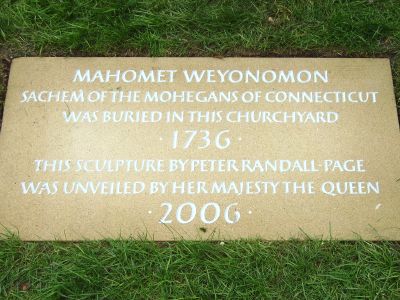 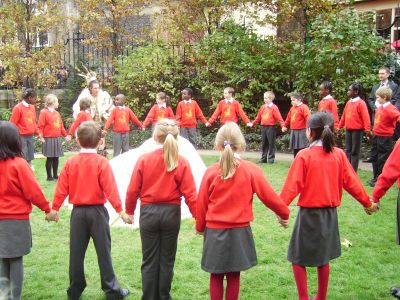 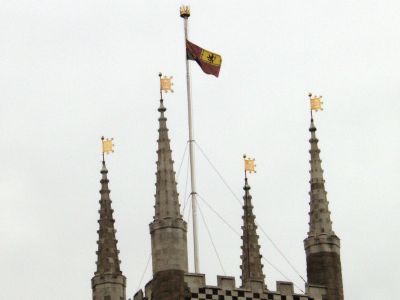 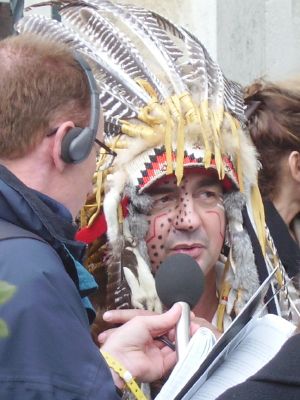 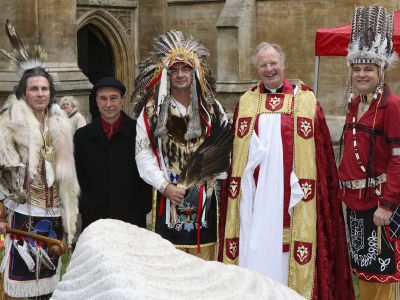 The new memorial, a granite boulder from the Mohegan tribal lands, has been placed in the churchyard and is the work of the sculptor Peter Randall-Page.

The Queen, accompanied by Prince Philip, arrived by way of Borough Market and was welcomed with a loud cheer from onlookers at the end of Cathedral Street.

Minutes later the Royal Standard was raised on the cathedral's flagpole as the Queen entered the Cathedral.

Earlier the arrival of Bruce Two Dogs Bozsum, the Mohegan tribal chairman, was heralded by the blowing of a conch and a slow drumming.

Mahomet came to Britain from Connecticut to petition King George II for justice because the English settlers in New England had encroached on tribal lands in defiance of instructions from London. However, he died of smallpox before the meeting.

As a foreigner, Mahomet could not be buried in The City and instead his body was taken by torchlit procession across London Bridge for a late night burial in the churchyard of Southwark Church, now the Cathedral.

During the 2006 short service, actor and congregation member Timothy West read the words of the 1736 petition. The tribal chairman then knelt before the Queen to present a copy of the petition intended for her ancestor 290 years ago.

Prince Philip read from the Letter to the Hebrews beginning with the words: "Let mutual love continue. Do not neglect to show hospitality to strangers, for by doing that some have entertained angels without knowing it."

Once the congregation had moved outside, the Mohegan party burnt sweetgrass and sage to bring good spirits, sang an Honor Song and presented the Queen with a peace pipe.

After the boulder had been unveiled children from Cathedral School held hands and danced in a circle round the stone.

Also present was the American Ambassador Robert H Tuttle who spoke briefly at the outdoor ceremony which was also witnessed by members of the public who crowded the railings in Borough Market and stood on cafe chairs for a better view.

Among visiting clergy was the Roman Catholic Archbishop of Southwark Kevin McDonald and Fr Marcel McCarron from St George's Cathedral.

• On leaving the cathedral, the Dean introduced the Queen to several members of the congregation who live locally. The Queen asked about progress at the Education Centre which introduces children to the cathedral and its history.

• In a message of support Mayor of London Ken Livingstone congratulates Southwark Cathedral "for undertaking this important project" and adds: "This memorial also serves as a reminder of what London strives to be today, a fair city that promotes equal rights for all."