Fears for affordable housing as Octavia Hill homes are sold

Tenants of the Octavia Hill estates - including homes in Southwark and Waterloo - have expressed concern about the sale of properties by their new landlords. 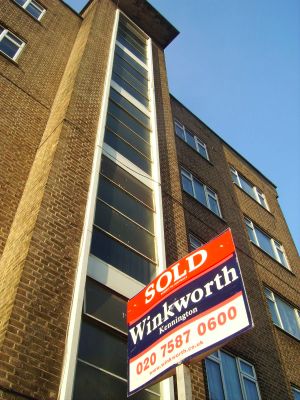 An estate agent's sign outside Benson House in Hatfields this week

Last month local MPs Simon Hughes and Kate Hoey met members of the Church Commissioners' assets committee to register a protest about the handling of their sale of the Octavia Hill Estates, including homes in Union Street in Southwark and either side of The Cut in Waterloo.

Despite a residents' campaign backed by local clergy and politicians, the properties were sold to Grainger GenInvest, a joint venture between private property firm Grainger and social landlord Genesis Housing Group.

Now the new owners have begun to sell off individual homes as they become vacant.

Several homes in Benson House in Hatfields (pictured above) which was purchased by Grainger GenInvest in April 2005 as part of a £70 million deal have recently been sold. A ground floor 2-bed flat was offered for £235,000. A one-bed flat on the second floor was advertised at £195,000.

Whilst existing tenancies are protected some residents remain angry that their children, key workers and others on low incomes will be unable to afford to live locally if market rents are charged or the homes are sold.

Tenants have told us that they are afraid to speak out in public about their concerns.

Speaking after last month's meeting, Simon Hughes said: "Kate Hoey and I asked the committee to learn the lessons from this unhappy procedure in the way they deal with all church assets in the future. We shall now turn our attention to make sure Grainger GenInvest do not sell off any of the homes they have bought in two boroughs where more social housing is still desperately needed."

Pathmeads Housing Association, the division of Genesis that manages the estates, confirmed last week that eleven of the homes are currently up for sale. The statement did not mention how many have already been sold or how many more the owners intend to sell when they become vacant.

Vauxhall MP Kate Hoey is unimpressed by the sell-offs: "Genesis are already backtracking on promises made when they purchased the properties.

"They seem absolutely determined to reduce even further the numbers of homes available for rent for those on lower incomes in Waterloo and Vauxhall.

"I shall be asking to Housing Corporation to investigate whether there has been any improper use of taxpayers' money."

Rosemary Bell from Pathmeads Housing Association told us: "In the six months that Pathmeads has been managing the Grainger GenInvest estates we have had a positive response from residents and we are pleased with the improvements we have been able to bring to the estates.

"I can confirm that eleven properties on the Octavia Hill estates are currently being marketed for private sale. However, we continue to, and have always confirmed that we will, safeguard the tenancies of long-term former Church Commissioners' tenants.

"We are progressing with our strategy to create mixed tenure communities and undertaking a programme of significant improvements on a number of estates."

Speaking in the House of Commons last week during a debate on the Greater London Authority bill, Kate Hoey responded to an intervention by Andrew Slaughter MP about a matter in his west London constituency involving Genesis Housing Group "When I hear the word Genesis, it immediately makes me want to jump up.

"Is my honourable friend aware that that same housing association is the body that bought the Church Commissioners' property through some sort of multi-deal and is now trying to sell as many off as possible, despite the fact that those homes were intended for people on lower incomes?